McClendon Robotics is a robotics company, located in Minerva's Den. Founded by robotics engineer Jack McClendon, McClendon Robotics developed many kinds of sophisticated electronics and machines to serve Rapture and its citizens since the time the city was established.

Many of McClendon's early products were domestic. However, when Frank Fontaine and his smugglers became known, and with the increase in aggressive Splicers, the company began marketing a series of Security Cameras, Security Bots, and Turrets, in partnership with Dr. Gilbert Alexander of Fontaine Futuristics. These products were designed to make the citizens and businesses feel safe, though the bots had the weakness of being easily hacked.

Jack McClendon was a genius when it came to electronics and robotics, but a lapse of business savvy would prove his undoing. The firm was financially successful until McClendon was offered a contract by Andrew Ryan to make Robotic Little Sisters. This contract stipulated that all the research and development for the project would be at the company's own expense, but a large payout was expected once the line became successful. However, by the time production on a full line was complete, Ryan's field tests had shown that the Big Daddy protectors ignored the robotic girls, causing problems for both the company, and McClendon.[1] The Rapture Civil War made the company's defensive robots very popular items, and they remained in operation even after the company was left in ruins.

To gain access to the Air-Tite Archives, Subject Sigma needs the Plasmid Electro Bolt to open the shorted-out door. Charles Milton Porter suggests he look in McClendon Robotics to find it.

After using the Hack Tool on a busted door, Sigma enters the facility. He finds a Splicer searching through some rubble and the Drill Dash Gene Tonic next to a Security Bot display. There are also three cans of Drill Fuel and a Remote hack dart in the room.

The Demonstration Stage is a large showroom in which citizens and businesses can get an exclusive preview of new products, most of which never made their way out of Minerva's Den. Now the place is a display of devastation. The space is dark, the floor is covered in debris, the main area is flooded, and the railings are bent as if an explosion went off. The only products displayed are the Baby-Minder, the Auto Chef (with a Vacuum Bot), and the Home Computer.

As Sigma enters the showroom he witnesses a pair of Splicers controlling Security Bots duking it out with one another. After dealing with the surviving Splicer, Sigma turns his attention to the Security Camera in the rear of the showcase. There's a Circus of Values by the entryway, a Health Station in the north-east corner, and an ADAM corpse in the center of the room.

Just beyond the Health Station is a storage room. From the huge amount of canned food on the shelves and boxes of drink stacked around the space, it can be assumed that this was where food was stored and prepared for visitors during the product demonstrations. A Machine Gun Turret stands guard over the EVE Link Tonic and two Thermal Cells stored in the back. A trio of Splicers will be wandering around the showroom when Sigma returns.

This area is where McClendon and his employees envisioned, created, and tested their inventions. As Sigma walks into the entrance hallway, he spots a Spider Splicer pacing by the windows in the System Design room. To the right of an El Ammo Bandito and a pack of Rivets are a set of arm chairs upon which are two Mini-Turrets and some snacks.

System Design is a split-level drafting and computing room where inventions are conceptualized as blueprints, such as the Laser Bot's Ion Laser, Robotic Little Sister, and Vacuum Bots. Various loot is scattered about including a Thermal Cell, Remote Hack Dart, a Spear Gun, some Spear ammo, Rivets, and assorted consumables. When the weapon is picked up, Reed Wahl sends a trio of Spider Splicers to attack. A machine gun Turret is located in the northern part of the room that can aid in the ambush. Beside the gun is an ADAM corpse. The northern-most room contains some Rivets besides a bank of computing devices.

The eastern drafting room contains a Sea Slug (Jeff) next to a Safe containing eighty dollars, one hundred unit of Laser Cell, and eighty units of Thermal Cell. After gathering these, a set of Splicers will enter the front room.

Employees in the Workshops, saw to the practical assembly and testing of the robotics and other electronics. A Bot Shutdown Panel is located to the right immediately upon entering. To the left is a flooded tool storage area. When Sigma arrives, he finds a Splicer and a Security Camera in this room along with the Handyman Gene Tonic. Picking up the Tonic summons a Splicer controlling a Laser Security Bot.

The main part of the WorkShops is a two-story workspace. Though dark and dingy, there are still some Splicers wandering about, most having their own Security Bot escort. The first floor has a Health Station and a Circus of Values. A test cubicle is towards the middle of the room with three cartons of Trap Rivets and an ADAM corpse nearby. The control room to the right has an Ion Laser. Past the vent in one end is a hidden room. Sigma had previously come across parts for Robotic Little Sisters scattered around McClendon Robotics, but here they're fully assembled and carefully positioned. A Robotic Little Sister faces the entrance on a pallet. A splash of water drops on it short-circuiting it as it moves for a few seconds. In addition to the childlike automatons, Sigma finds a Safe, a Vacuum Bot, copious bottles of Old Tom Whiskey, and the likely corpse of Jack McClendon.

The second floor is guarded by a Grenade Launcher Turret by a large window. When Sigma looks out this window, a Big Sister swims by. In the control booth is the crane control panel. Sigma uses it to move the two hooks blocking a path across a metal beam. When he does, three Spider Splicers appear: one above, and two below. Across the beam is a small computer room that was connected to the control booth before the catwalk collapsed. There are more Robotic Little Sisters neatly posed, and one holds the Electro bolt Plasmid. There's a Safe in the back of the room as well.

Upon exiting with the Plasmid, Sigma observes a Lancer and his Little Sister have entered the Worksphops and are gathering from a corpse.

There are three ADAM corpses. 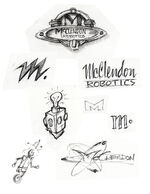 Concept art for the logo #1, by Devin St.Clair.

Concept art for the logo #2.

An early version of the McClendon Robotics entryway (note the slightly different design for the mural).
Add an image to this gallery 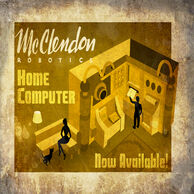 Advertisement for the McClendon's Home Computer.

Unused "Robotics" sign.
Add an image to this gallery

Retrieved from "https://bioshock.fandom.com/wiki/McClendon_Robotics?oldid=306226"
Community content is available under CC-BY-SA unless otherwise noted.