“Yes folks… In two simple steps you too can have a good square meal!”
― Advertisment[src]

Meal-Time Frozen Dinners is a line of frozen meals produced by Value King in Rapture that are eaten on metal trays. Its mascot, Mr. Squaremeal, is a guy in a stylish suit with a meal tray for a face.

Some of the Splicers trapped in Fontaine's Department Store have cut out the face of the man on the poster to use as a mask to hide their deformities. 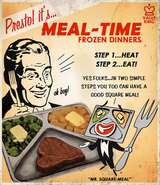 The Meal-Time Frozen Dinners poster intended for BioShock, in better condition than the one seen in BioShock 2. 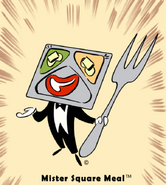 Mister Square Meal, the mascot of the company.