Transcript: Prison, it seems, was a blessing -- Ryan is now dead by his own son's hand. But far more interesting is the program of compulsion bred into his child, coded "W-Y-K." It was some manner of verbal "trigger phrase," which the boy would obey as an order, unerringly. In a way, this sad thing, this... half-man had 'escaped the self'. Highly intelligent, but devoid of so called "free will," with all its convenient blind spots. What if he had been instructed to uphold the common good? What if he were a volunteer?

Location: On a couch to the right of a Splicer stuck to the wall with spears on the central lower level. 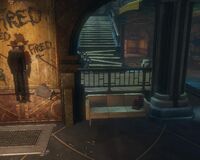 Retrieved from "https://bioshock.fandom.com/wiki/Means_of_Control?oldid=245168"
Community content is available under CC-BY-SA unless otherwise noted.