“Ladies, don't let a few wrinkles or crow's feet get between you and the man in your dreams. Whatever the flaw, Dr. Steinman has a solution. Come see him at Aesthetic Ideals in the Medical Pavilion…”
― Public Address Announcement[src]

Medical Pavilion is the second level of BioShock, after Welcome to Rapture. Jack will be confronted here by the mad surgeon Dr. Steinman in an attempt to gain access to Neptune's Bounty. It is also here that Jack will acquire ADAM and fight a Big Daddy for the first time.

When founded, the Medical Pavilion was the hub for medical business and inquiries in Rapture, and was responsible for treating various illnesses and health-related problems. As ADAM became widely available among the citizens of Rapture, its self-healing abilities changed the use of all of the Pavilion's healing facilities. Later, due to the instability of ADAM and excessive use amongst many of Rapture's citizens, unforeseen physical deformations began to occur. In response, many hospital facilities quickly became replaced by cosmetic surgery facilities such as Dandy Dental and Dr. Steinman's Aesthetic Ideals. The Medical Pavilion is largely intact, with the exception of the dental facilities.

One of the highest ranking doctors was Dr. Steinman, a cosmetic surgeon who was known to be a perfectionist in his work. Dr. Steinman was the head surgeon in the department of Aesthetic Ideals, and believed strongly in the remarkable effects of ADAM. However, as Dr. Steinman continued his personal use of ADAM, he began to suffer chronic brain and physical damage. The more obsessed and deranged he became, the more he strived for "perfecting" his skills by deforming his patients as well. Out of all the reported cases of his surgical abuse, the most famous was of Diane McClintock, whose face was distorted beyond the damage done after Atlas' attack. Dr. Steinman's growing insanity shows what "splicing" could potentially do to anyone, and the danger which ADAM and Plasmids came to be.

The foyer was the entrance and reception for the Medical Pavilion where patients checked in and out. The access to the pavilion itself is controlled from a security booth on the other side of the upper level. The door to the Emergency Access is jammed by a Security Bot which can be dislodged by hacking it.

The emergency access behind the foyer was used by the pavilion's security detail. A Bot inventory is located right near the entrance, which one of the bots jammed after smashing through the display. On the other side is the locked emergency Bathysphere docking station. As soon as Jack activates the control console upstairs, the access will go into lockdown, preventing him from leaving with the submersible. The lockdown can only be lifted by using the Access key possessed by Steinman, the head surgeon, who runs the place and the many crazed Splicers haunting it. The corridor upstairs leads to the control booth containing the switch to open the pavilion's entrance, which also liberates a horde of hostile Splicers in the process.

From the entrance, a corridor leads further into the pavilion, with many advertisements for Steinman's surgery operations and other health services in Rapture. A ghostly vision appears to Jack as he reaches the other side, showing one of Steinman's disfigured patients after the surgeon became obsessed with asymmetry.

The main area is a display of Steinman's insanity, with messages painted in blood next to patient studies. At the entrance is a booth for the Enwell Life and Health Group insurances, guarded by a Gun Turret, and a small waiting lobby. The left side leads to the Funeral Services area, with the Twilight Fields Funeral Homes and the Eternal Flame Crematorium. On the right side is a supply closet guarded by a Turret and another waiting lobby with two functional vending machines. Further up is the Lounge locked from the inside. The stairs at the end of the halls lead down to a second supply closet whose switch is short-circuited, and the Dental Services access frozen and blocked by a busted pipe nearby. Further on from the main floor is a glass tunnel leading to the Surgery pavilion.

The Eternal Flame crematorium is locked from the inside. A Nitro Splicer, who is fed up by a spliced woman banging on it to be let in, blasts the door open. Inside, a Security Camera overlooks a crematory oven which can be activated to retrieve a Gene Tonic. Upstairs are the corpse lockers and an office with a bottle of Incinerate! Plasmid found near a broken Gatherer's Garden. As soon as Jack enters the office, Ryan sets a bounty of 1000 ADAM on his head, bringing a group of hostile Splicers. They circle the room, not noticing the puddle of oil on the floor.

The door to Twilight Fields' is blocked by ice from a busted pipe. The office has a reception desk, supply closets and a morgue in the back. A few Splicers lie in ambush to surprise and strike at Jack in several rooms. The danger is worth it as the funeral home contains several valuable loots, including a Gene Tonic.

The Dental Services area hosts the many dentist offices which once operated in the Medical Pavilion, and are now shelters for the Splicers. In the middle of the floor is a mutilated corpse next to a Shotgun and several 00 bucks, set as a trap by many Thuggish Splicers who will shut off the light and strike Jack from the darkness. The partially flooded Kure-All office is guarded by a RPG Turret, and displays the gruesome result of an Enrage Plasmid test trial led by Dr. Suchong for Fontaine Futuristics. Dandy Dental was a dentists office which Suchong covertly used to test out Telekinesis, which later offered free samples to customers by Ryan Industries. Painless Dental is locked from the inside and protected with a Turret. The spliced physician who lives there tries to lure Jack in. A vent in the operating room leads to a locked supply office nearby. Chomper's Dental is also locked, with its key left in sight through a broken window. Two Security Cameras watch over the flooded office. Most of the dentist offices hold a safe containing loot.

The Surgery foyer is the fierce battleground of two Nitro Splicers throwing grenades at each other. With the access to the offices blown up and blocked by Steinman, catching one of those grenades with Telekinesis is the only way to clear the debris. Once inside, Steinman sets a Gun Turret and a Bot at Jack to dissuade him from interrupting his work. To the right of the hall is Surgical Savings, guarded by a single camera and containing several loots. Further along is the entrance to Steinman's lair, Aesthetic Ideals. As soon as Jack enters the viewing room of the operating theater, he witnesses Steinman killing one of his patients in a fit of rage. The mad surgeon then notices Jack and fires at him with a machine gun.

Before any operation, patients and their associates could wait and relax in a Lounge containing various ADAM products. The tunnel to Surgery is damaged after Jack retrieved the Emergency Access key, which forces him to make a detour through that Lounge nearby. There, a Bouncer is thrown through a window by an explosion, and his defenseless Little Sister is hunted down by a Splicer. Tenenbaum intervenes and shoots the splicer and then threatens Jack. She can only convince Jack to spare the girl with the promise of a reward, while Atlas urges him to get as much ADAM as possible. Regardless of his choice, she gives Jack her Little Sister antidote Plasmid to cure the girl. Inside the lobby is a functional Gatherer's Garden in a large display, selling a small choice of genetic modifications. Later on when reaching the main lobby, another Bouncer and his gatherer are encountered, offering Jack his first fight with the gruesome protectors.

New Plasmids and Tonics (At a Gatherer's Garden)Edit

"Dr. Steinman will make a new woman out of you. Guaranteed." 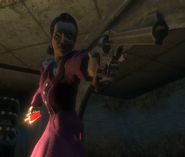 "I'll not have him hurt my little ones!"

A theatrical Gatherer's Garden.
Add an image to this gallery

Concept art for a medical office, by Eric Lawson.

Retrieved from "https://bioshock.fandom.com/wiki/Medical_Pavilion?oldid=320248"
Community content is available under CC-BY-SA unless otherwise noted.