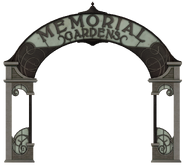 “Your mother's dead, Elizabeth."
"Yes. I think it's time to paid my respects. Let's head to where she's buried.”
― Booker DeWitt and Elizabeth[src]

Memorial Gardens is a cemetery in Downtown Emporia. Both Lady Comstock and the Lutece twins are buried here.

After failing to activate the Comstock House Gate handprint lock, Booker and Elizabeth travel here to obtain the preserved hand of Lady Comstock.

For a final resting place in the middle of the city, there are a lot of unburied bodies. Vox Populi and Founders have clashed here, leaving fresh corpses lying on top of old. The area has been desecrated with looting and graffiti on the walls. Fogs rolls over the silent headstones as lightning and thunder rage in the skies above.

Some of Columbia's most prominent citizens are laid to rest here. Among them are the graves for the Luteces, both oddly empty.

A mausoleum looms over with a Gear visible behind its gates. Lighting the other flaming torch with Devil's Kiss will open them. 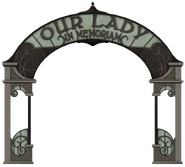 The most prominent "residence" that of the beloved Lady Comstock. She was laid to rest here after her untimely murder. Snippets from Mozart's Requiem Mass in D minor play near the crypt.

The gates are locked, but Elizabeth summons a Lock through a Tear. As she picks it open, she explains that her mother's body was preserved in an airtight chamber with its fingerprints intact. Booker questions the sanctity of such an act to which Elizabeth retorts that a mother who abandons her child "doesn't draw a lot of sympathy in my book".

As Booker opens the now unlocked gate, "Lacrimosa" begins to play. The glass coffin to surrounded by burning braziers with the First Lady's placid features still visible. Elizabeth makes mocking small talk about how both of them were locked up in cages. Booker offers to open the coffin.

However, upon inspecting the lock, the lights and music suddenly go out in the mausoleum.

"You see child, you chose to follow a False Shepard and he has led you astray. What I do, I do for love! What lion does not cringe to see their cub in pain! But spare the rod, spoil the child. But if you won't listen to me, perhaps you'll listen to your mother!"

Comstock resurrects Lady Comstock as a deranged specter. Nervously, Booker opens to gate to see the ghost resurrect the surrounding corpses in turn as her undead minions.

Tears are available to assist Booker. Medical Kits are located in the rear crypt as well as under the archway near the stairs. A Crank Gun and a Shotgun are on the upper walls.

Eventually, her minions are dispatched and the Siren vanishes into ethereal vapor. Elizabeth questions whether the spirit was the source of power. Booker asks, "But what is she: alive or dead?".

Familiar voices ring out from the previously empty graves:

"Why do you ask what...
...when the delicious question is when?
The only difference between past and present...
...is semantics.
Lives, Lived, Will Live.
Dies, Died, Will Die.
If we could perceive time as it truly was...
...what reason would grammar professors have to get out of bed?
Like us all, Lady Comstock exists across time.
She is both alive and dead."

It is the Luteces, digging their own graves. They explain that Lady Comstock finds her condition "disagreeable" and that "perception without comprehension is a dangerous combination".

Elizabeth points out ghostly footsteps which the Luteces remark that the spirit still has unfinished business in this world. When Booker turns back, they have vanished.

Upon coming to the graveyard's exit, the Luteces now wait at the gate. They recognize Booker and Elizabeth's plight since they need Lady Comstock to open the gate. To reason with the deranged spirit, they explain that they must bring forth three "truths" about the First Lady. The evidence has been destroyed by Comstock, but are still accessible to someone with "the power to alter time and space".

Thus, Booker and Elizabeth must find three Tears at the Cunningham Studios, the Bank of the Prophet, and Lutece Labs.

The tomb can be accessed…

The inside of the tomb.

Booker facing off against enemies in the cemetery.
Add an image to this gallery

"These Silver Eagles may lose their value. But gold… gold always trades."
Add an image to this gallery
Retrieved from "https://bioshock.fandom.com/wiki/Memorial_Gardens?oldid=313458"
Community content is available under CC-BY-SA unless otherwise noted.