Mercury Suites is one of the residential housing areas in Olympus Heights (along with Athena's Glory). A high-end establishment, it was home to some of the most affluent members of Rapture society. The building spans multiple stories (only four are accessible to the player), with an elevator at its center leading straight to the penthouse.

In a city like Rapture, space and luxury came at a high cost. However, for those who could afford it, Mercury Suites provided both in spades. With their unique, multi-level layouts, open floor plans, floor-to-ceiling windows, and elegantly detailed finishes, the apartments quickly became home to the crème de la crème of Rapture society. This included some of the city's greatest minds.

During the Civil War, the building and its tenants became targets for followers of Atlas. The site suffered severe interior damage resulting in many of its apartments being abandoned by their residents. Makeshift barriers and turrets were set up at the entrance but even these failed to deter the swarms of spliced-up attackers. As the war dragged on and the populace's minds warped from ADAM abuse, some of the residents even turned on their own neighbors.

Citizens who have called Mercury Suites home include:

Jack is instructed to find an antidote for Fontaine's mind control. Brigid Tenenbaum suggests he travel to Mercury Suites and investigate Dr. Suchong's flat for clues to a possible cure. After navigating the heavily fortified Central Square, Jack traverses the winding and treacherous tram tunnel before finally reaching the Suites. Just as the entrance is in view, he's greeted by the sounds of Cole Porter's You're the Top and a welcome party of a Nitro Splicer and a pair of Leadhead Splicers brandishing Machine Guns.

After dealing with the Splicers, Jack finally enters Mercury Suites. The front desk has been heavily barricaded with sandbags and security booths to better protect the residents; though, with all the corpses scattered about, the site clearly still saw some serious action.

Immediately beyond is the atrium connecting the accessible floors, and it's a grim sight. The once bright halls of the Suites have gone dim. The corpse of a woman is lashed to a tree in a small planter in the center. She was shot with arrows and then, to add insult to injury, the word "whore" was scrawled across her chest. A Power to the People machine is located on the column holding up the winding staircase up to the other floors.

As Jack rounds the corner, a Leadhead picks a fight with a Rosie guarding a Little Sister. The commotion will attract the attention of a Thuggish Splicer in the back left corner of the first floor, a Nitro Splicer on the second floor, and another Nitro two floors up on the winding stairway, so Jack's best option is to hug the perimeter as he explores the area.

Suchong's flat is the first on the left. Some poor soul died desperately on the good doctor's doorstep. As Jack enters the domicile, Fontaine warns him to be suspicious of Tenenbaum. The dining room has been barricaded, the stairway up to the second floor has caved in, and the living room and study have flooded. A Leadhead Splicer emerges from the dining area. The kitchen is a grisly mess with corpses and blood spatter scattered about the space. One bloody corpse is spread out on top of the counter as an anatomy experiment, a cannibalized source of fresh meat, or something far worse. A Thuggish Splicer investigates the bodies.

The audio diary Mind Control Antidote located in the study reveals the existence Lot 192. Tenenbaum confesses to having stole a dose of the serum for examination and believes that the rest of the formula will probably be located in Dr. Suchong's Free Clinic in Apollo Square. As Jack leaves the apartment he comes face to face with a Grenade Launcher Turret and the Splicer who just set it up.

Further along is the home of acclaimed artist Anna Culpepper. Like many others, Culpepper's apartment has been hit hard by the war. The foyer has been ransacked, the music and dining room are both covered in rubble, and the expansive kitchen is leaking. A security camera has been set up in the hall. At the top of the stairs, a Nitro Splicer keeps watch on the place. A Thuggish Splicer enters the apartment shortly after Jack. On the second floor, is the lounge, bedroom, and bathroom, the latter two of which are flooded. Culpepper's corpse still lies in the tub where she was attacked while drawing a bath.

On the Eastern side of the first floor is Sander Cohen's apartment; the gentle tones of Cohen's Scherzo can be heard wafting from within. If the player chose not to kill Cohen while in Fort Frolic, the manic musician will welcome Jack in. The kitchen and study are in a disheveled state. A Splicer is playing dead in the dining room and a fire rages in the library, but the real show is in the ballroom where a pair of Splicers share a waltz.

If Jack disobeys the composer's orders not to disturb the dancers, Cohen will rush down from upstairs, unlock the doorway up, and fight him. Cohen's bedroom is decorated in masks and plastered statues. There's a Power to the People machine and painting supplies in one corner. In the other are stacks of advertisements for Ryan's Songbird, confiscated in a feeble attempt to diminish the scathing album's presence. The master bath is littered with bottles of Moonbeam Absinthe and more plastered corpses.

The elevator to Fontaine's penthouse apartment is locked, so Jack heads upstairs looking for clues to the door code. Dr. Tenenbaum's apartment is just opposite the stairway, but the front door is locked as well.

Though the name above the door has been eroded away, this was once the home of a family of five. Here they chose to end their suffering together rather continue the nightmare of life in Rapture. The bodies of the father, mother and three little girls still lie on the sofas in front of the television where they took their poison. The apartment is not empty. A Thuggish Splicer skulks around the living space. The place is in sorry shape and there’s not much of value besides the safe hidden behind the bed.

The pathway up to the fourth floor has collapsed. There’s only one apartment on this floor, but Jack can gain access to Tenenbaum’s suite through the gaping hole in the wall. Along the way, he finds the spot where an overly ambitious Paparazzi spied on Fontaine. The needed door code is found in his diary.

Like the apartment on the floor below, the residents of this domicile have long since moved on. Now a pair of Splicers have taken up residence. The flat is pretty secure with a barrier of furniture blocking the path from the foyer to the living room and a string of trap bolts restricting further access. Beyond the dining room is the kitchen in which a man appears to have been gunned down execution style. What appears to be the corpse of a dead drunk is in actuality a Leadhead playing possum.

After harassing Jack, the Thuggish Splicer will retreat to the master bathroom while the Nitro takes point at the top of the stairs. The bathroom and bedroom have been thoroughly tossed. Aside from a small amount of loot, there’s not much to collect. Just past the Abandoned Apartment is another Leadhead pretending to be dead.

Jack enters the home of Dr. Brigid Tenenbaum through the caved in wall. After taking out the guard, he finds himself on the second floor bathroom. The once lovely residence now lies in darkness and ruin. Over the radio, Tenenbaum heartbrokenly laments the sorry state of her ransacked abode. There’s various valuables in the library, along with a still-looting Thuggish Splicer. The first floor is partially flooded and the pathway to the kitchen area is blocked by rubble. A Machine Gun Turret has been set up in the now flooded living room near a safe. Breaking the padlock on the front door will put Jack back on the second floor of Mercury Suites and face-to-face with a Leadhead Splicer.

Upon entering the code, Jack will gain access to the penthouse elevator. As he rides the lift up, Tenenbaum implores Jack to help deliver the Little Sisters from the accursed city as he moves on with his mission.

The elevator ascends to the penthouse level and opens to Fontaine's Japanese rock garden. The space is well-maintained, but there's nothing zen about it. A Thuggish Splicer examines a machine gun turret set behind a large boulder in the center of the sand. Overhead, a security camera scans the area, while two Leadheads patrol the perimeter. Fontaine's security system is rigged so that if the camera detects an intruder and sounds the alarm, the front door will lock (the otherwise green light beside it will turn red).

Inside the penthouse suite Danny Boy can be heard playing over the sound system. After all of the destruction seen throughout Rapture, Fontaine's suite is in eerily fine shape. The entrance hall, smoking lounge, and dining room are untouched. The kitchen and bathroom have some torn up tiles, but are otherwise in good condition. A steamer trunk hidden behind the mounted polar bear overlooking the grand staircase contains a plethora of useful ammunition.

Upstairs, a machine gun turret has been set up behind the bar in the billiards lounge. The floorboards in Fontaine's massive bedroom have been torn up revealing hidden messages and letters. The study has been cordoned off with trap bolts. A dose of Lot 192 is on the chemistry set next to a Chemical Thrower and the Electric Flesh 2 tonic. Jack experiences side effects after taking the formula as his Plasmids start shifting uncontrollably. He faces down a Nitro and Leadhead Splicer who enter Fontaine's flat, as well as a Security Bot-controlling Leadhead outside in the rock garden, before returning to the lower floors. Next stop: Apollo Square. 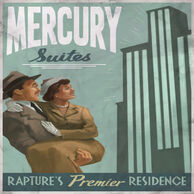 An advertisement for Mercury Suites. 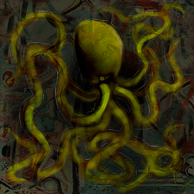 A painting depicting an octopus, found in Suchong's and Tenenbaum's apartments.

Robbed of her luxuries and branded a Whore.