Prior to the outbreak of the Civil War, the Mercury Suites served as the home to a number of members of Rapture's upper class. By the time the Civil War began, most of suite's residents had either fled or barricaded their homes.

The Lower Atrium is the ground floor of the Mercury Suites. The south area of the atrium consists of a check-in lobby with a help desk as well as a vending machine located behind the counter. The entrance to the Rapture Metro station can be seen just beyond the metal gates in the lobby. To the left of the vending machine is an apartment with two blocked doors and what appears to be a nursery (two ADAM Vials are seen in the apartment, and can only be grabbed with Telekinesis), a Machine Gun Turret in front of the doorway with an iron gate, and access to a restroom. The room to the left in the lobby is a luggage storage room. The northeast area of the atrium consists of a Machine Gun Turret located behind a barricade of sandbags and located at the center area of the atrium is a pagoda that holds an empty elevator shaft. The pagoda spans from the ground floor to the roof of the atrium. The stairways leading to the Upper Atrium are located in the northwest and southeast areas of the Lower Atrium.

Also located in the Lower Atrium, the Medical Suite is on the opposite side of the restroom. The suite consists of two rooms and a corridor with a vending machine. The first room is the doctor's office and the second room is an operation room with two patient chairs.

The Upper Atrium (also known as the first floor of the suites) is mainly a large open area with walkways lining the walls of the atrium and mostly locked doorways. The south area has a crater that acts as an opening the leads to the check-in lobby below, in front of which is a small atrium visible through the closed gates. The apartment door in the east area of the atrium leads to Glamour Suite. The north apartment door leads to the Penthouse Suite. The center of the atrium is occupied by the center pagoda with the (still empty) elevator shaft and a bridge that connects the west walkway to the east walkway. The walkway that lines the walls of the pagoda is occupied by a Grenade Launcher Turret. The second floor of the atrium can only be access by use of the elevator, which is out of order. The second floor consists of three balconies. There is a possibility that there was a walkway that lined the walls of the second floor portion of the pagoda that since the north, west, and east balconies do not have guardrails, which means the second floor pagoda's walkways and bridge could have been destroyed. The east and west balconies can only been accessed via crawling across the flower boxes on either side of the Penthouse's balcony.

Located on the north area of the Upper Atrium's second floor, the Penthouse Suite is by far the largest suite in the Mercury Suites. The Penthouse Suite is the only suite to have a first and second floor. The first floor consists of two rooms. The first room is the entrance foyer which consists of a main staircase that leads to the second floor, bookcases on both sides of room, a large stuffed bear statue, a doorway on both the east and west sides of the foyer's first floor. The room in the west area of the first floor is a gallery with a vending machine and a Machine Gun Turret. The room in the east area of the first floor is a kitchen which is in a fair amount of disrepair.

The second floor of the suite consists of two rooms. The room in the east area of the first floor is a breached safe room which has a hole left from an explosion that goes to the suites first floor kitchen corridor. The room located in the south area of the suites second floor is a small library/corridor with two doorways which lead to the south balcony on the second floor of the atrium. The Penthouse Suite's design was intended to appear reminiscent of Frank Fontaine's suite which was originally located at the top of the elevator/pagoda. Fontaine's name is even marked at the apartment's entrance.

There are 4 vending machines.

There are 3 Little Sister vents on this map:

There are 3 control points for Turf War on this map:

Concept art of the lampposts and columns for the map.

Concept art of the walls and railing for the map.

Concept art for the Mercury Suites.

An image of an early version of the map. 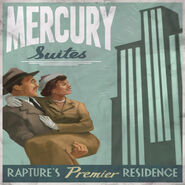 Advertisement for Mercury Suites, seen only in the Multiplayer.
Add an image to this gallery

A hostile Rosie in the Penthouse Suite.

A view of the Upper Atrium.

The Glamour Suite's piano room.
Add an image to this gallery

Retrieved from "https://bioshock.fandom.com/wiki/Mercury_Suites_(BioShock_2_Multiplayer)?oldid=319672"
Community content is available under CC-BY-SA unless otherwise noted.