“I dreamed a computer that could think for itself. And using Rapture's technology, I made that dream reality, a machine that could actually think, reason for itself.”
― Charles Milton Porter[src]

Minerva's Den is a single player downloadable content for BioShock 2 and was initially released on August 31, 2010 for Xbox 360 (800 Microsoft Points) and PlayStation 3 ($9.99). This additional campaign is a self-contained narrative experience that puts players in the role of another prototype Big Daddy in a previously unexplored section of Rapture. The DLC was officially released for the Windows platform on May 31, 2011, in the Games for Windows Live marketplace and was later released on Steam on October 2, 2013.

Minerva's Den shows a new side of Rapture within Minerva's Den, the high technology district of the city, and explores the backstory of The Thinker, a supercomputer responsible for the control of many automatic devices and systems in the underwater metropolis, and its creator Charles Milton Porter.

Players take the role of Subject Sigma, the eighteenth Big Daddy of the Alpha Series, reactivated and sent by Brigid Tenenbaum to Minerva's Den while the events of BioShock 2 are taking place elsewhere. Sigma's task is to help Porter, founder of Rapture Central Computing, retrieve the blueprints and codes of The Thinker from Porter's former colleague Reed Wahl, a brilliant mathematician driven mad by splicing and obsessed with solving an absolute "predictive equation". Porter and Tenenbaum seek to recreate The Thinker on the surface, and use it to find a cure for the ADAM sickness afflicting Rapture.

In 1968, a newly reactivated Subject Sigma is making his way to Minerva's Den. Reed Wahl, seeing Sigma's arrival with dread, detonates the tunnel access to Minerva's Den through which Sigma was walking, sending him to the ocean floor. After regaining consciousness, Sigma is contacted by Porter, who is looking for help to retrieve a copy of The Thinker's programming code, his life-work, which he wishes to take with him when escaping to the surface. Tenenbaum seeks The Thinker's computing capabilities to synthesize a cure for the effects of ADAM on Rapture's remaining spliced population and sent Sigma to Porter in order to recover the computer's code.

Guided by Charles Milton Porter, Sigma enters the Minerva's Den facility through a maintenance access airlock. Reaching the main entrance in complete darkness, he finds that Wahl has posted several Splicers to stop him. After restoring the main power to this part of the complex, Sigma heads to the Executive Wing to retrieve the Operations Access Punchcard hidden in Porter's office. This is required to access the Computer Core through the Operations sector. After the punch card is recovered, the Operations Access is still blocked by a magnetic lock, which can only be removed through the use of the Gravity Well Plasmid. According to the Thinker's records, the Plasmid can be found at the Air-Tite Archives, but first, an Electro Bolt Plasmid is required to force open a malfunctioning entrance door. Another detour is then needed into McClendon Robotics to retrieve both that genetic enhancement and a Hack Tool. Once all those tasks are done, Sigma can finally continue on his way to Wahl and The Thinker.

Along the way, it is revealed to Sigma that the two founders of Rapture Central Computing had opposing visions of how The Thinker should be used. Wahl wanted to use the machine's remarkable computing power to generate an algorithm capable of predicting anything. Porter, on the other hand, was using it for a more personal purpose: to have The Thinker emulate the voice and personality of his long-dead wife Pearl, his grief for whom he was never able to overcome, even after coming to Rapture.

At Operations, Sigma is asked by Porter to salvage a signal beacon from a sunken bathysphere in the nearby junkyard outside the building, and then to reprogram it in Wahl's office in the Programming wing. This is important to their escape plan, as the reprogrammed beacon will render Porter's private bathysphere invisible to the torpedo launchers set by Sofia Lamb to prevent anyone from leaving Rapture. Once it has been done, Sigma reaches the Computer Core sector where The Thinker awaits, but so does Wahl, whose equation has not yet predicted the outcome of their final confrontation. More important to Sigma, the Thinker is also the key to the mysteries surrounding his own identity, and Porter's reappearance in Minerva's Den after being framed by his former colleague and imprisoned at Persephone 10 years previous.

Reaching the Core, Wahl locks the main access, forcing Sigma to pursue him through the Access Shafts. At their exit, he discovers an audio diary revealing Porter had set a hidden protocol for The Thinker before being arrested by Andrew Ryan's men. This Rapture Departure Protocol set the machine to find a way to escape the failing city on its own. At the core room, where the gigantic mass of computing devices forming the machine lies, Sigma is asked by Porter to go to the code printer and confirm his genetic identity. However Wahl, as a final act against his foe, shuts down The Thinker, putting in jeopardy the whole city which needs the machine's control to stabilize its many vital functions. He then confronts Sigma directly and is killed by the Big Daddy. With Wahl dead, Tenenbaum, who had reestablished radio contact with Sigma when The Thinker was shutdown, urges him to recover the Administrator Punchcard from Wahl's corpse. The Thinker is reactivated and Sigma's genetic identity, upon printing its programming code, is discovered to be that of Charles Milton Porter himself.

The voice, who previously claimed to be Porter on the radio, is revealed to be The Thinker itself, emulating the voice and personality of its creator. Tenenbaum then explains that using a familiar voice was the only way to guide Sigma through Minerva's Den and that the machine acted on its own to help Porter escape as a way of following the Rapture Departure Protocol, something neither he or Wahl would have imagined the Thinker capable of. With his identity restored, Porter walks through his private office to reach the bathysphere dock where Tenenbaum awaits. He passes by his many souvenirs and memories of his wife. He finds an audio diary which reveals that upon giving the voice and personality of his wife to the machine, Porter abandoned the project; realizing that he could never bring Pearl back to him that way to overcome his sorrow.

Revealed in the epilogue, Porter and Tenenbaum were able to return to the surface world in the bathysphere, and that she was able to restore his former body and voice with the cure she was working on. Standing in front of his wife's grave, he leaves a letter in which he apologizes to her for trying to use The Thinker to bring her back, and that he finally decided to let her go.

The player has access to a new weapon (the Ion Laser), a new Plasmid (Gravity Well), and a new Gene Tonic (Master Protector, only if the player has completed The Protector Trials DLC). Minerva's Den also features a new type of Splicer, the Fiery Brute Splicer. The Wintry Houdini Splicer from BioShock makes a return, and there are two new Splicer models, Heady and Buttons, with unique personalities and dialogue. A new type of Big Daddy, the Lancer, is capable of using the aforementioned Ion Laser. Security Bots in this campaign have an expanded range of weaponry and are outfitted with Grenade Launchers, Ion Lasers, and a lightning rod that allows the device to deal electrical attacks.

Instead of Power to the People stations, the player finds original and upgraded versions of weapons throughout the campaign. Upgraded Plasmids are also available in the beginning, provided the player has purchased the previous levels of Plasmids (one exception is a Level Two Incinerate! found in Climate Control). The Research Camera is also not present. Instead, the player may find certain Gene Tonics that come as a result of research scattered throughout the levels. Many ADAM Sea Slugs are also to be found, appearing both in the ocean and inside jars located around the complex. Sigma must break the jars to obtain the slugs inside them. Vacuum Bots also contain some interesting goodies; these too have to be destroyed first. As with the main game, rescuing Little Sisters results in Gifts being left at Gatherer's Garden stations, but dealing with the three Little Sisters on the first two levels also results in attacks by Big Sisters, as in the main game. One major difference from the main game is that while it will impact whether or not the player receives gifts from the Little Sisters, harvesting or saving them has no effect on the DLC's ending.

Although 2K Games had initially promised to release Minerva's Den for PC on the GFWL marketplace, the decision was later revoked as a result of "timing and technical issues." 2K apologized to the players, as they had promised that this content would be forthcoming to the Windows platform and that if the situation changed, they would offer it in the future.[1][2] 2K later explained that in trying to prepare patches with support for the additional content, they encountered bugs under specific circumstances that they felt would not be acceptable to the Microsoft certification process, and while they had tried to correct those bugs, they were unable to do so in a timely manner, leading to their decision to abandon the attempt. The announcement was met with heavy criticism from many players who felt that 2K Games took advantage of their "goodwill" in the promised game and DLC updates.[1] In late October, 2K Games reversed their decision based on the players' responses, and have recommitted resources and support for the content pack on the Windows version. Minerva's Den was released on May 31, 2011.

In 2013, users found Minerva's Den listed in Steam's Registry, which suggested that this DLC would see a Steam release in the future. Because Games for Windows Live closed its store to new purchases, Steam is now the only method to obtain the DLC on the PC platform. It was finally added to Steam on October 2, 2013, and was given for free to those who previously bought the game on Steam or any other retailers, and allowed retail versions to be registered to the gaming platform. 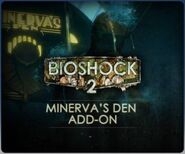 Banner for Minerva's Den on Steam.

The Lancer and a Little Sister in Minerva's Den.

A Security Bot fitted with an Ion Laser.

Reed's Office.
Add an image to this gallery

Wahl's maddening equations.
Add an image to this gallery

Retrieved from "https://bioshock.fandom.com/wiki/Minerva%27s_Den_(DLC)?oldid=319159"
Community content is available under CC-BY-SA unless otherwise noted.