Monument Island is a major area in BioShock Infinite. It is the primary location sought by Booker DeWitt as he begins his adventure in Columbia.

The Monument Island attraction consists of several parts: the Monument Island Gateway which featured the gondola to ferry citizens to and from the Monument and Monument Tower itself which serves as the home to Elizabeth, who has been held there her entire life. The Tower is divided into the public demonstration area and the private observation rooms.

Monument Island was the main landmark of Columbia and a popular tourist attraction. Monument Island was also the location where immigrants passed through when arriving at the city,[1] until it was changed to the Welcome Center. Citizens could board the gondola at the Monument Island Gateway to visit the home of the Miracle Child. Docking stations to the Gateway were prominent in the Town Center with locations at Raffle Square and Shady Lane.

However, the popular tourist destination was suddenly closed by Zachary Hale Comstock. Citizens speculated on the reason for the closure ranging from bad weather, disease, or supernatural haunting, ultimately putting their trust in the Prophet's judgment.[2] They could take comfort in viewing the Tower peeking out from the clouds in the distance.

Workers were still able to take the Sky-Line to perform maintenance at Monument Island, but after several strange incidents, the entire site was deemed unsafe to enter.[3] By the time of Booker's arrival in 1912, the place is overgrown with vines and the interior hastily abandoned.

Having just come from the darkened Fraternal Order of the Raven in the Comstock Center Rooftops, Booker enters the sunlight and heads towards the Monument Island Gateway. However, the gondola has long since been closed to the public and he finds the area heavily fortified by the Columbia Police warned about his arrival.

Taking the workman's route over the Sky-Line, he narrowly avoids constant enemy fire. Suddenly Zachary Hale Comstock orders his forces to stand down over a PA system and they kneel to pray. Booker enters the tower and rides a lift to the top unopposed. As he does, Comstock addresses him from a giant monitor attached to a Security Zeppelin, revealing that he knows who Booker is and his mission before warning him to leave. Booker heads towards the rooftop access to the Sky-Line, but the zeppelin sideswipes the building. He boards the vessel, wipes out the armed guards, and enters the bridge to steer the airship to Monument Island. The control room is empty, save for a female pilgrim in white robes and a habit praying at a candle-lit shrine. Booker calms her, stating he won't hurt her and takes the helm. Comstock suddenly appears aboard a fast-moving gondola, says a brief prayer, and flies off at which point the woman sets fire to herself and the dirigible, forcing Booker to jump ship.

As the zeppelin explodes, Booker reaches the Sky-Line and lands at the Monument Island Station as the ship falls out of the sky. He then ascends to enter Monument Island itself.

Booker crosses the courtyard, hops the fence via a Freight Hook, and enters the facility. Placards warn visitors not to touch or approach the specimen and indicate that the site is under the control of the Columbia Science Authority, but the area seems abandoned and has an uneasy quietness about it.

As Booker passes through the check-in rotunda and arrives in a research area, the signs indicate longer and longer quarantine periods from 12 to 72 to 168 hours. An abandoned locker features a Voxophone, a gas mask, and two pinups belonging to Ty Bradley, an employee uneasy about the dangers of the area. The lobby is littered with unused posters advertising Monument Island and a hastily painted quarantine line.

At the end of the hall is a diagram charting the "Specimen's" growth while, further along, a large piece of high-voltage equipment marked "Siphon" demonstrates on three objects or "Transposes": Age 4 - Companion - Teddy Bear; Age 11 - Poetry Book; Age 13 - Menarche.

Further along are a series of rooms. A projection room and photo lab reveal that the scientists have been spying on the girl for years. The dark room displays photos taken of the girl (even in instances where she is dressing up). The projector in the screening room shows clips of certain activities, such as painting, dancing, singing, lockpicking, and cracking the Vox Cipher. In an adjoining operating room, Booker finds collections of blood, hair, and nail clippings. The gramophone cheerily plays "After You've Gone".

Booker continues into a room with a massive Siphon that seems to be drawing in and materializing an immense amount of energy while emitting distorted sounds of Elizabeth humming "Everybody Wants to Rule the World". The blackboard in the room indicates that the facility is too hazardous for research to continue. Ignoring the warning signs, Booker boards an elevator and heads up.

Booker passes through a series of observation rooms where the scientists at the center secretly spied on Elizabeth through one-way mirrors in her bedroom, conservatory, bathroom, dressing room, dining room, and library. Through these mirrors, Booker finally spots his target and gets a troubling demonstration of her powers.

Booker finds Elizabeth in the Library, the only way forward is the exit on the very side of the statue and climb towards the head. Booker re-enters, only to come crashing into the library. Elizabeth is understandably terrified at the presence of this unknown intruder but then intrigued. The Whistler in a statue announces that the two have company and Elizabeth insists that Booker leave. He offers her the key to the tower and they both flee.

While running, Elizabeth is horrified as she sees the observation rooms and realizes that she's been secretly watched. Before explanations can be given, Booker has his first encounter with Songbird as the creature tears the structure apart trying to get at the pair. The two escape to the top of the statue before being flung off. An intense ride on the Sky-Line ensues as Songbird darts through the air. Suddenly the monument collapses and a large part of it breaks the Sky-Line apart. Booker and Elizabeth tumble through the air before landing in the waters of Battleship Bay. Songbird tries to follow Booker underwater, but cannot take the water pressure, suffering a crack in his glass-covered eye. 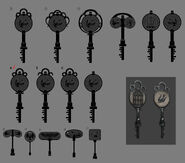 Concept art for the Tower key.

Propaganda poster for the tower.

A photograph of Elizabeth and her Songbird doll.

Best View in All of Columbia! - Behold! Her Glory. 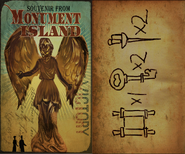 Diagram showing the construction of the Siphon.

Early concept art for a room showing Elizabeth as a child and tracking her development by Ben Lo.

A view of the angel among the clouds in the Town Center.

Elizabeth viewing Paris in the 1980s through a Tear.

Booker falls into the Library.

Booker shows the key to set her free.

A dead-end at the top.

Booker is at the mercy of the Sky-Lines as they are dismantled.