“Look at her, ain't she some kind of beauty. You know, that's where all the immigrants used to pass through."”
― Male Civilian[src]

Monument Tower is a colossal statue made in the likeness of the Archangel Columbia which serves as a major landmark in the floating city. It is the main attraction on Monument Island, but can be seen most anywhere in the city.

Built by the architects under the leadership of Zachary Hale Comstock, Monument Tower served as the iconic center of Columbia and the location that new immigrants to the city would have to pass through when entering Columbia. The Tower's function was changed to have a religious purpose shortly after construction. According to the "Gospel of Columbia," God delivered Comstock a female heir after a miraculous seven day pregnancy by Lady Comstock. The child would be raised in Monument Tower until she would eventually succeed Comstock as ruler of Columbia.

Originally built as a centerpiece for the World's Columbian Exposition in 1893 the Tower's purpose changed when Comstock brought the infant Elizabeth to Columbia. Lady Comstock was enraged, accused him of infidelity, and refused to let the child be raised in her home. Comstock moved Elizabeth to the Tower where it served as a gilded cage, protecting her from harm, as well as a way to control and shape her to become Columbia's next ruler. When Elizabeth's powers manifested the lower part of the Tower was converted into a research facility run by Rosalind Lutece, Robert Lutece and the Columbia Science Authority. The upper portion became the Specimen Observation area where Elizabeth would be observed on a daily basis. As Elizabeth's powers grew, access to Monument Tower and actually the whole of Monument Island became restricted to only those allowed by Comstock.

Due to Elizabeth's growing power a massive device known as the Siphon was built in the lower part of the tower to dampen her strength. This proved to be of limited success as Elizabeth's power continued to build and could not be contained. This necessitated parts of Monument Tower being temporarily evacuated. Eventually all of Monument Island would be abandoned for days and even weeks at a time until the danger had passed.

Booker DeWitt is initially given, among other things, a postcard featuring the Tower at the Maine Lighthouse.

When Booker first enters Columbia and arrives in Town Center, he uses the postcard to orient himself. The entrance to the Monument Island Gateway can be seen in the Raffle Square, but Booker inadvertently reveals himself to the Columbian Police, forcing him to detour through Shady Lane and the Comstock Center Rooftops.

After a harrowing encounter with Comstock on board a Security Zeppelin, Booker makes it through the Gateway and ventures into the abandoned Monument Island. Climbing his way through the Tower, he discovers that scientists have been keeping a close eye on Elizabeth with recordings and observations. He falls into the Library, where Elizabeth is understandably terrified at the presence of this unknown intruder, but is then intrigued. Just then, Elizabeth's guardian, the Songbird, appears when summoned by a Whistler and starts attacking the intruder, destroying the building in the process. Booker and Elizabeth narrowly manage to escape just as the statue starts coming apart and the Sky-Lines are destroyed.

Booker and Elizabeth end up in the waters at Battleship Bay relatively unharmed. As they try to make their way to the airship The First Lady in order to escape the floating city, the clouds suddenly drift away, revealing the destroyed Tower. Citizens on the boardwalk are notably distraught at the damage while Elizabeth feels remorse for the loss of her former home.

The Tower makes a symbolic appearance in the First Lady's Memorial exhibit in the Hall of Heroes. "The Transport of the Child" depicts Comstock carrying the infant Elizabeth to a replica of the Tower for safekeeping against the anarchist Daisy Fitzroy.

Hand of the Prophet[edit | edit source]

On board the Hand of the Prophet Booker and Elizabeth discover a model of the Tower near Comstock's quarters showing the Siphon running throughout its base which functions to dampen Elizabeth's powers.

Later, they have to defend the Hand of the Prophet from an assault by the Vox Populi. Once their zeppelin reaches Monument Island, Elizabeth hands a Whistler to Booker who plays the notes C-A-G-E, whereupon Songbird destroys what remains of the tower, and with it, the Siphon inside.

When Elizabeth enters the Silver Fin Restaurant while journeying through the Housewares department of Fontaine's in Rapture, she discovers that Dr. Yi Suchong has been observing and photographing Columbia through various Tears. One of these Tears gave him a view of Monument Tower, and a large photo of the statue is displayed front and center in the reception area of the restaurant. 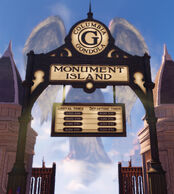 The closed Gondola to the Monument Island Gateway.

The entrance to the tower. 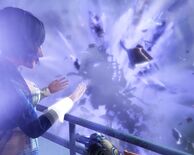 The destruction of the Siphon.
Add an image to this gallery
Retrieved from "https://bioshock.fandom.com/wiki/Monument_Tower?oldid=328340"
Community content is available under CC-BY-SA unless otherwise noted.