BioShock Wiki
Register
Don't have an account?
Sign In
Advertisement
in: Quotes without a source, Articles needing citations, Machines,
and 4 more

BioShock Infinite: From Hall of Heroes to the end

“Tin men, Booker! That's what Comstock will turn us into! Wires and gears to replace heads and hearts!”
― Cornelius Slate, about the Motorized Patriots[src]

The Motorized Patriot is an automaton built in Columbia with the likeness of a major figure in American history, and is a part of the "Heavy Hitters" class of enemies in BioShock Infinite.

“The MOTORIZED PATRIOT is a testament to the technical prowess and power of Columbia.”
― Fink Manufacturing advertisement

The Motorized Patriots were originally built to be tour guides for the city of Columbia,[1] representing the beliefs of the Founders. With the war between factions, they were reprogrammed by different factions to be destructive foes. Wearing flags, a presidential facade, and shouting propaganda, this clockwork enemy is unwavering and brutal. Ken Levine, co-founder of Irrational Games says, "Unlike most of the enemies, he's completely fearless. He doesn't have a sense of self-preservation, so he'll just keep coming at you and coming at you and coming at you."[2] As the player deals damage to the Motorized Patriot, the porcelain-like rubber mask will fall off, revealing the skeleton-like metal and wooden frame behind the mask.

The Motorized Patriot has four varieties of outfits: a cracked porcelain George Washington mask (note that the non-hostile Motorized Patriots and the first Patriot the player fights do have pristine masks) and the most common model seen throughout the game, a mask in the likeness of Benjamin Franklin found only in Finkton Docks, Finkton Proper, and the Factory, an Abraham Lincoln devil mask with a complete change of clothing used by the Vox Populi that appears from Emporia onwards, and a final form representing Zachary Hale Comstock in a Confederate-style dress uniform that is only fought in Comstock House. Friendly George Washington variants can be brought through Tears; they have green lights instead of red, and fly normal American flags in place of Columbian ones. This is the only occasion where Motorized Patriots have green lights, apart from when under the effects of Possession.

The developers simply defined the Motorized Patriot as "completely fearless" and "will keep coming". In-game, the Motorized Patriot is exactly that, choosing to relentlessly charge forward with its weapon blazing rather than attempting to take cover, stopping only to reload its gun. If attacked from up close, it will attempt to bash its assailant with its Crank Gun, throwing them back several feet. When firing, the Motorized Patriot's speed is slowed to a sluggish walk, but when it stops firing (such as when Booker is out of sight or behind cover) it picks up the pace and sprints forward with loud, metallic stomps. Despite its mass and apparent lack of grace, the Motorized Patriot can also leap over gaps and small barriers.

The Motorized Patriot features a new heavy weapon, the Peppermill Gatling Gun, known simply as the Crank Gun in-game. Unlike the Rivet Gun wielded by Rosie Big Daddies, the Peppermill is usable by the player character, Booker DeWitt. Outside of rare environment Tears, they can only be found on a Motorized Patriot. The weapon can carry 200 rounds, and has 100 bullets in each magazine. Extra ammunition for the Peppermill cannot be obtained, so once all the rounds are spent, the gun becomes useless to the player.

In Burial at Sea - Episode 1, after Sally's cries for help summon a Bouncer Big Daddy to attack Booker, a Motorized Patriot can be summoned through a Tear to help in the battle. This Patriot sports Columbian flags and recites pro-Comstock propaganda phrases.

The following are phrases that the Motorized Patriot says in BioShock Infinite. The name of the source audio file is listed when known.[Audio files needed]

While idling at the Columbian Archeological Society[]

After finishing a wave[]

When failing a wave and returning to the Columbian Archeological Society[]

After failing a level[]

After completing all levels[] 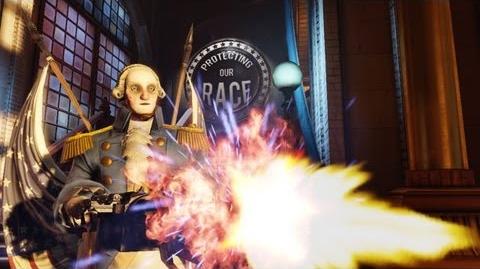 The team at Irrational Games explains the concept behind the Motorized Patriot. 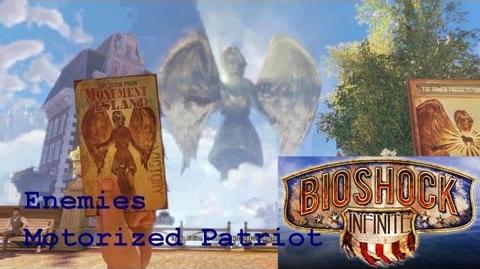 The Motorized Patriot during gameplay. 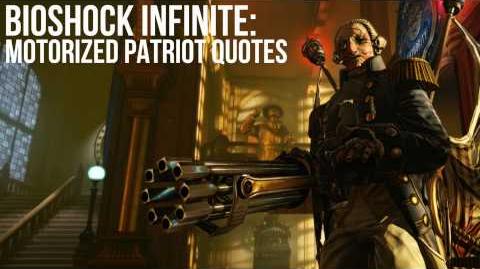 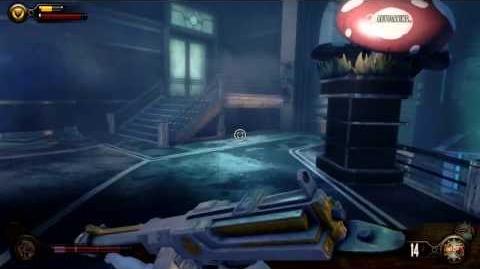 Footage of a Motorized Patriot fighting a Bouncer. 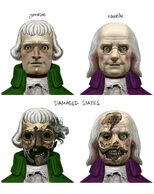 The concept for the Jefferson and Franklin masks. 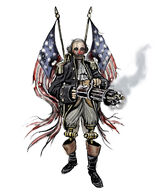 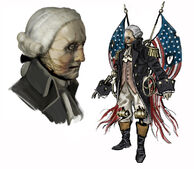 The profile and full view. 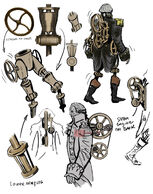 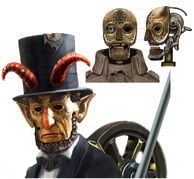 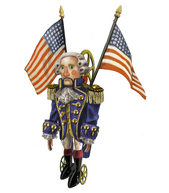 Concept art and models for the Motorized Patriot pods. 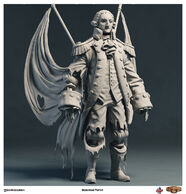 An early preview of the Motorized Patriot (Note the American flags).

Booker aiming his gun at the Motorized Patriot.

The Motorized Patriot makes a surprise attack at a Columbia Security building.

"What is hidden shall be revealed."

"Why would you run if you were not guilty?" 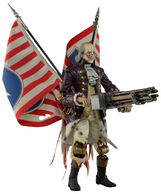 Motorized Patriot as a chocolate treat. 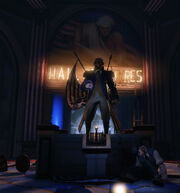 The Patriot in the entrance of the Hall of Heroes.

All the Comstock Patriots start operating in the Hall of Heroes Gift Shop.

A Motorized Patriot summoned from a Tear. (Note the green lights and American flags.)

Masks for the Motorized Patriots (Note that the Comstock mask has glowing eyes.).

The body lacking a head.

Zachary Comstock variant inside a chamber.

Close up of the Vox Patriot. 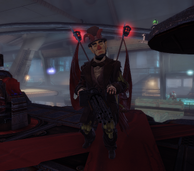 Booker against the Motorized Lincoln.

A Comstock Patriot on the roofs of Comstock House.

The Patriot in Clash in the Clouds.

A Patriot in the Emporia Arcade. 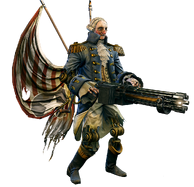