Mrs. Lin is a middle-class citizen of Columbia. In BioShock Infinite, she is the wife of gunsmith Chen Lin.

Booker DeWitt and Elizabeth are forced by Daisy Fitzroy to collect weapons from Chen Lin in exchange for the First Lady Airship, which Fitzroy has taken in the name of the Vox Populi. After making their way to Fink Manufacturing, they enter Lin's workshop, but find that Chen isn't there. However, they do find May Lin weeping as she prays to Gautama Buddha for Chen's safe return. She reveals that her husband has been arrested for his connection with the Vox and is imprisoned at the Good Time Club. She wonders why Daisy Fitzroy has yet to help Chen.

Booker and Elizabeth head out to the club, but arrive too late and find that Chen was beaten to death during an interrogation. Elizabeth notices a Tear over Chen Lin's body and, upon opening it, she sees that Chen's body is no longer visible and that he could possibly be alive in the alternate world, and so the two travel through it.

Booker and Elizabeth return to Chen's workshop, where the Buddhist shrine they had seen earlier has changed to a shrine to Father Comstock, Mrs. Lin is now the Caucasian Sarah Lin, and the equipment from the workshop is missing. Chen Lin himself is alive, but is apparently affected by his "resurrection." Sarah Lin is shattered by Chen's disturbed state, and posits that he must be devastated because his tools have been confiscated and taken to the impound in Shantytown by the police. When Booker and Elizabeth locate the tools, they realize they have no way of transporting them. They open a tear to a new reality where they believe the tools are back at Lin's shop, allowing him to successfully provide the Vox with weapons.

Upon visiting the workshop for the final time, Booker and Elizabeth find both Chen Lin and Mrs. Lin murdered together at the entrance of their workshop. It has transpired that the Vox Populi no longer need Chen's guns, as Elizabeth had opened a Tear into a universe where the Vox already have weapons.

May Lin is a practicing Buddhist and a Chinese citizen of Columbia. For both of these reasons, she experiences a severe degree of prejudice from the upper-class citizens of the city. She believes in the mission of the Vox Populi, but is gravely concerned about the dangers associated with her husband's clandestine support for the cause.

Sarah Lin (née Sansmark) is an incredibly open-minded woman for her time. Despite her devotion to Comstock and Columbia's heavy stigma against the act of interracial marriage, she married Chen Lin, whom she loves and supports. She is torn between her loyalty to her brother Scofield Sansmark, the Head of Security for Jeremiah Fink (thus a member of the Founders), and her loyalty to her husband Chen, who supports the Vox Populi's cause for racial equality. When Chen is taken for questioning, she uses all of her connections to spare her husband's life. 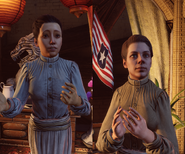 May and Sarah Lin.

The corpses of Chen and Sarah Lin.