The Player's Apartment is a multiplayer only solo zone where the player can change loadouts, customize their character, and listen to Tester ranking messages.

When the player first starts a multiplayer game, he/she is treated with a cutscene in which the player's selected character wakes up on the apartment floor, with a used, bloody ADAM Hypo beside them. An announcement by Andrew Ryan is then played on the character's television set, followed by a message from Sinclair Solutions on the player's recording machine. Finally there is an announcement over the public address system stating that the Kashmir Restaurant was just attacked. Afterwards, the player must customize their wardrobe and loadouts before starting a multiplayer game.

The apartment is provided by Sinclair Solutions, on loan to the player for the short time the player is taking part in the tests.[1]

This is where the player first wakes up after having passed out from splicing. Here, the player watches Andrew Ryan make an announcement on their television set. A recording machine on the coffee table contains messages from Sinclair Solutions which are updated as the player progresses. A Gene Bank in the hallway allows players to edit their loadouts. The living room also contains a record player where the player may listen to music, although it does not affect gameplay in anyway.

Here, the player can visit their wardrobe and change their mask and/or melee weapon. A Log Recorder sitting on a couch allows players to listen to audio recordings from various Multiplayer Characters. There is a 3-open-sided fireplace next to the wardrobe. The apartment has a bathroom, though it serves little purpose. Within are a mosaic tiled floor, candles, various decorative items, a broken mirror (since the player can switch between characters here, loading their models for viewing could be cumbersome), and a bathtub with stagnant water.

The player can exit their apartment and head to the Metro. On the way is a News Vendor where the player may view various high scores. In the entry hall, there is a gate blocking entrance into a hallway to other apartments. It is full of blood and debris. Once the player enters the bathysphere, they can enter the Multiplayer Lobby and may join an open multiplayer game, or set up their own private game. While waiting for a game to begin, the player can also change their character, customize their appearance, edit their loadout, or view personal statistics.

Concept art for the Apartment.

Concept art for the Apartment. 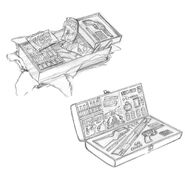 The photo found next to the bed.

An Art Deco city painting found in the bedroom.

An abstract painting near the reading area in the bedroom. 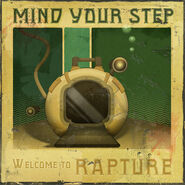 "Mind Your Step" sign, found by the bathysphere.
Add an image to this gallery

The view out the window.

A view of the bedroom with the Bathysphere hub in sight.

Another view of the bedroom.

A blocked corridor leading to other apartments.

The crashed Apollo Air Flight DF-0301, appearing during the epilogue.
Add an image to this gallery

Retrieved from "https://bioshock.fandom.com/wiki/Multiplayer_Apartment?oldid=321621"
Community content is available under CC-BY-SA unless otherwise noted.