BioShock Wiki
Register
Don't have an account?
Sign In
Advertisement
in: Quotes without a source, BioShock Infinite Vigors

“MURDER OF CROWS: Stun and damage your enemies with a thousand needling beaks.”
― Fink Manufacturing advertisement

Murder of Crows is a Vigor in BioShock Infinite that gives control over groups of crows. Casting the Vigor sends out a swarm (or 'murder',[1] hence the name) of crows that will attack all enemies in front of the player, momentarily distracting them and dealing continuous minor damage. Charging the Vigor will deploy a crow trap at the target location for twice the Salts cost which, upon detonation, will send out crows to attack every enemy in a wide radius. Murder of Crows is ineffective against all automatons, Zealots of the Lady, and the Siren.

Murder of Crows is the third Vigor the player acquires over the course of the game. While going through the headquarters of the Fraternal Order of the Raven, Booker will run into a Zealot of the Lady, who drops the Vigor upon death.

The Murder of Crows container, as seen in the debut gameplay demo.

Murder of Crows by a corpse marked "CAPITALIST" in the E3 2011 Gameplay Trailer.

The killer crow, as seen in the debut gameplay demo.

Murder of Crows in action.

Booker uses Murder of Crows in the E3 2011 Gameplay Trailer. 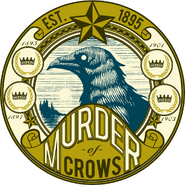 The original bottle label, used in the demo and on merchandise.

A keychain replica of the bottle, exclusive to the BioShock Infinite Premium/Ultimate Songbird Edition.

Concept art of Shock Jockey and Murder of Crows.

Victims of Murder of Crows.