The Museum of Orphaned Concepts is a museum-style level exclusive to the BioShock Ultimate Rapture Edition and the remastered version of BioShock in BioShock: The Collection, containing early concept art and ideas that were removed from the final version of the game. Like the locations from the Challenge Rooms, the museum is not considered canon, but does serve to enrich the BioShock narrative.

Welcome to the Museum of Orphaned Concepts - a guided tour of ideas that Irrational Games discarded or reworked heavily during the making of the original BioShock.

Not as much of a cut concept as an easter egg for observant museum visitors, these sea creatures can be seen swimming past the player's view during the bathysphere ride down to Rapture in BioShock's opening sequence.

Irrational's artists tried to envisage how an underwater city would actually function in this early conceptual work of Rapture. One idea imagined a thick forest for the purpose of oxygen exchange, seen here with an observation catwalk running around the edge. The concept of using trees for oxygen exchange made it into the final game in the Arcadia level.

It may be hard to imagine that this creature - whose job it was to reclaim ADAM from corpses around Rapture - was the earliest iteration of the idea behind the Little Sisters. Since The Gatherer generated absolutely no sympathy from players, the team experimented with concepts for featuring a number of animals (including the infamous "dog in a wheelchair") and later a grotesque, miniature humanoid. Finally, a concept sketch of a deformed child inspired the eureka moment responsible for the Little Sisters.

Irrational's internal name for this prototype Big Daddy variant - who mauled players with an enormous hook and fired iron bearings from a barrel - stood for "slow projectile/fucked up melee." He survived long enough to become a fully functional AI, but the team eventually cut him to focus on polishing the other Big Daddy types. This model later appeared in BioShock 2 as the Rumbler, throwing miniature turrets instead of cannonballs.

This original model for the Bouncer type of Big Daddy featured a flat headed drill at the end of each arm. The Big Daddies were envisioned as the builders of Rapture. with weapons modified from tools they would have used in its construction. When the Gatherers were reimagined as Little Sisters, one of the Bouncer's drills was changed to a gloved hand so the two characters could interact with each other.

The first Splicer that Irrational created for BioShock, "Stitchy" was used in many early concept demos and was fully functional in game with kinematics, hit reaction, and voiceover. "It took us that long to realize he wasn't a good model," says lead artist Shawn Robertson, "This is probably the worst abortion that Irrational has ever made."

These are some of the first concept sketches to show BioShock's enemies moving in a more human-like direction. Artists coupled that approach with the idea that Adam deformed the body in a way that related to its intended function - for instance, a giant, grotesque arm on a melee enemy.

Before solidifying the fiction around Adam, Irrational experimented with the idea of it being an external, injected substance. "Here you can see us playing around with Adam being mechanically injected," said lead Artist Shawn Robertson, "so this Splicer's got vials of it on his belt." This model was created but never made it into the game in any form.

Moving from grotesque to human was a slow process. While early concepts saw the melee enemies grow monstrous arms, the team had trouble conveying how someone who had spliced to become a marksman would appear.

These are early concepts for the Rosie type of Big Daddy who, like the Bouncer, was envisioned as a construction worker who had been repurposed as a protector for the Gatherers.

The Big Daddies - originally called Protectors - were envisioned as dive-suited construction workers retasked with the defense of Adam Gatherers. They used construction tools or improvised weapons that looked like they had been found on the sea floor.

From left to right are early concepts for the melee, ranged, and slow-projectile Protectors.

This grey elephantine Splicer was an early "Grenadier" from the same period of development as "Stitchy" and "Hooker". "He was a guy who spliced to carry around giant grenades and throw them at you", says Lead Artist Shawn Robertson. The model was built and textured, but never animated.

The location depicted here was built for the "vision demo" of BioShock, a small level demonstrating several of the key elements of the game such as the Big Daddies and Gatherers.

This area appears in the Neptune's Bounty level of BioShock, but the bodies floating in the ocean were cut late in development when their cast shadows proved too distracting from the action in the room.

Created around the same time as "Stitchy" and the Grenadier, this Splicer was dubbed the "Hooker" because of her weapon of choice. This concept evolved into the Spider Splicer when it was decided that Splicer models could fill any behavior role and the Hooker model later became the Baby Jane Splicer.

This is an early concept depicting a Big Daddy bursting through a wall, which inspired the audio log in the Big Daddy Training Grounds area about a "rogue Big Daddy" (the player then encountered him at the end of the level).

This is a concept sketch depicting what would later become a submarine bay - an area which housed an important scene for Atlas.

This early concept for Sander Cohen's Fleet Hall was created after level building had begun, when the designers found they were having difficulty conceptualizing the theater space. It was one of the earliest spaces built for BioShock and many of the assets used in this museum come from that area.

This was the first image that really captured all the visual elements that made BioShock "BioShock": a large view of the ocean, the aquatic lighting scene, and the elegant art deco design elements. Without this image BioShock would have been a radically different beast.

This was one of the several paintings that tried to portray the most important elements of Rapture at once. These images would help define the ruined, underwater Art Deco aesthetic that the team was attempting to capture.

This character is essentially the "missing link" between the grotesque early designs and the human Splicers that appear in BioShock. "This is the last 'bad' model we did before moving on to what actually went into the shipping game", says Lead Artist Shawn Robertson. "After playing with him for a while, we just said 'Why don't we use humans instead?' I always thought of these as 'Scooby-Doo monsters' because they were too inhuman to invoke empathy."

This character - derisively called "Yam Hand" around Irrational Games - was the poster child of the conceptual phase that preceded the decision to go with human enemies.

"I'd point out the drawings behind the model", says Lead Artist Shawn Robertson. "You can see the top one got built, but the other two informed the design as well. As we trended more toward humanoids, the 'Scooby' monsters got goofier and less scary."

This was the fourth protector concept, originally created with an organic "slug" attached to it. A model was started but never completed as the team narrowed their focus to three and finally just two Big Daddy types.

"I still liked this as a Protector", says Artist Robb Waters. "We started modeling and I really pushed to get it in, even as just a static model on the floor, but it never made it."

These were some of the earliest pieces done for BioShock, from back when Irrational was still working on SWAT 4. The only concrete ideas at that point were an undersea city and biological experimentation, so early concepts focused on those themes. 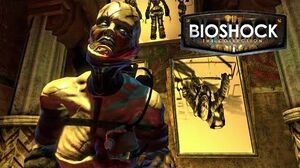 Rifleman concept art followed by various designs of what would become the Rosie.

Early concept art and model for the "Hooker," later the Spider Splicer. 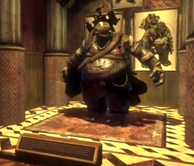 Early concept art and model for the "Grenadier" Splicer. 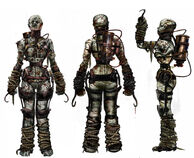 Early Environmental Stud.
Add an image to this gallery

The Slo-Pro-Fum Big Daddy. Later appearing in BioShock 2 as the Rumbler.

An early version of the Bouncer Big Daddy.

The Grenadier Splicer in all his blubbery glory.

An early version of the Spider Splicer.

The Missing Link between the early Splicer concepts and those seen in the game.

An early version of the Sea Slug.

Looking down the Museum from near the entrance.

Some of the concept art on the lower level of the Museum.

Early concept art for the Big Daddies.
Add an image to this gallery

Retrieved from "https://bioshock.fandom.com/wiki/Museum_of_Orphaned_Concepts?oldid=324079"
Community content is available under CC-BY-SA unless otherwise noted.