BioShock Wiki
Register
Don't have an account?
Sign In
Advertisement
in: Burial at Sea DLC, Need to Know Theaters, Vending Machines,
and 3 more

For the equivalent in Columbia, see Kinetoscope.

“Are you in the know?”
― Need to Know Theater narrator[src]

Need to Know Theater is a series of vending machines created by Ryan Industries and located throughout Rapture. They are only seen during the BioShock Infinite: downloadable content Burial at Sea.

1958 was a turbulent year for Rapture. Andrew Ryan needed a way to keep public opinion positive. He had Rapture Film Productions compose a series of semi-propagandistic documentary shorts on important issues the city was facing. Then he had a series of nickelodeons set up to exhibit the films. Sander Cohen had some of his avant-garde films displayed through the machines, though these were not a part of the "Need to Know Theater" series.

Booker DeWitt can view the Need to Know Theater films as he explores the city. Since the machines are a public service, they are free (although, in Episode One, they're usually positioned directly in between a pair of Slot Machines). There are three films that are a part of the Need to Know Theater in High Street and two Sander Cohen Kinetoscopes that are located in Fontaine's Department Store, respectively.

Elizabeth will come across two Need to Know Theaters, one Sander Cohen kinetoscope-style film, and a vandalized Theater as she explores the Housewares building. Another Kinetoscope is found while exploring the Factory. 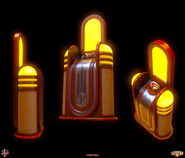 Model for The Need to Know Theater. 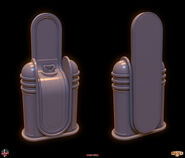