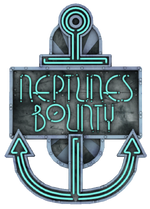 “One man's Trash is another Man's Treasure!”
― Postcard[src]

A tightly interconnected set of rooms, Neptune's Bounty is a largely flat map with multiple connections between the various wharves and shops, centered around the Sinclair Metals business. It is a retooled environment for BioShock 2 Multiplayer of the Neptune's Bounty from the first BioShock. Neptune's Bounty was one of the notable ports for seafood and other products in Rapture.

Neptune's Bounty was the first fishery in Rapture (to date) and was used heavily by Frank Fontaine and his men to smuggle stock and equipment from the surface.

Also, this place was used by Sinclair Metals, a business owned by Augustus Sinclair, to collect Rapture's scrap on the ocean floor and to sell them back to the citizens who needed them.

This area was the main entrance to this area. The Metro Entrance leads to both the Lower Wharf and continues to the Upper Wharf. Travelers to this area had to pass through here.

The Wharfmaster's Office area was where the Wharfmaster's head of operations was located. The desk is located in the corner of the office and a jail cell is located at the end of his office. There is a pin-up poster dated 1954 in this area. This area allows access to both the Lower Wharf and to a freezer going to the Upper Wharf.

The Upper Wharf was an extension of the Lower Wharf and used primary for loading and shipment. This area would have been bustling with crowds of people traveling from the Metro Station to the Wharves and to the Shops area. This area contains a vending machine and lever that controls a crane which when lowered offers protection from the RPG Turret. The area is easily the most active place for the "action" considering that the area has about six ways to get to it.

There are 5 vending machines.

There are 3 Little Sister vents.

There are 3 control points.

The Lower Wharf.
Add an image to this gallery

Retrieved from "https://bioshock.fandom.com/wiki/Neptune%27s_Bounty_(BioShock_2_Multiplayer)?oldid=312002"
Community content is available under CC-BY-SA unless otherwise noted.