The New York Orb was a newspaper that was in circulation at the time of There's Something in the Sea. There are 123 known issues published, and the paper actively published an evening edition. The only two known headlines are "Bloody Break-Out!" about Orrin Oscar Lutwidge's escape from Tollevue Mental Asylum and "Slaughter On The High Seas!!!".

SLAUGHTER ON THE HIGH SEAS!!!Edit

SLAUGHTER ON THE HIGH SEAS!!!

"These leftist groups are often havens of rampant drug abuse," said the official. "We're just
lucky they didn't unleash this kind of violence on American streets during one of their acid
binges." American victims include captain Casey Ferrence, 52, a dishonorably discharged
former Naval officer who appears to ahve turned to illegal smuggling. Officials have not yet con-
firmed the death of an unregistered passenger, Mark G. Meltzer of Montauk Point, New York. 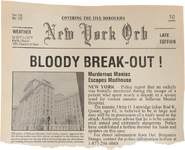 The issue about the slaughter onboard the S.S. Nellie Bly.
Add an image to this gallery
Retrieved from "https://bioshock.fandom.com/wiki/New_York_Orb?oldid=311520"
Community content is available under CC-BY-SA unless otherwise noted.