“I can hear that Splicer sounding off like it's the 4th of July.”
― Atlas[src]

Permanent 15% chance that enemy grenades will be a dud

Permanent 35% chance that enemy grenades will be a dud

Nitro Splicers are Splicers who throw grenades and Molotov cocktails at their enemies, occasionally blowing themselves to bits when they realize they have no chance of winning the battle. The Nitro Splicer is the only BioShock-exclusive Splicer type.

Nitro Splicers are a double-edged sword, depending on one's playing style. If the player prefers to use guns, their Wrench, an offensive Plasmid, or a combination of the three, they may be in for a hard time, as the explosives the Splicer uses can take a big lump of health out of them at a moment's notice, at a range or through pursuit. On the other hand, Plasmids work wonders against this Splicer type, more so than against any other enemy. Because of the projectile nature of their attacks, they are particularly vulnerable to Telekinesis.

Cannon Fodder? - Depending on the player's Plasmid setup, they may be the bane of their life, or a welcome source of explosives to hurl at their enemies. If tackling a group of Splicers, it can prove very efficient to just hurl the Nitro Splicer's grenades at his comrades, then turn them on him. A couple of the "bosses" in BioShock are also Nitro Splicers. Bear this in mind and plan accordingly. This Splicer upgrades at the game's midpoint, switching from Grenades to the more damaging Molotov cocktails. Nitro Splicers are highly resistant to melee and piercing damage but are more vulnerable to explosive damage.

Notable Behavior - Nitro Splicers utilize several tactics. First, they use smoke bombs in addition to explosives, which they use if a player gets too close. Second, they tend to retreat, covering their passing with an explosive "shoulder toss" which can be a pain to anyone chasing them. Nitro Splicer bosses, such as Hector Rodriguez in Fort Frolic, use this tactic. Third, they are the only Splicer capable of killing themselves. When they are heavily wounded, they set themselves on fire, bomb box included. Not immune to their own explosives, this promptly blows them to the dark side of hell, inflicting heavy explosive damage to anyone around them. Lastly, upon their demise, they tend to drop their last bomb, a final surprise for unwary looters. With full Nitro Splicer research, this particular bomb is very often a dud.

There are four Nitro Splicers who prove significant to the story: one in the Medical Pavilion, one in Neptune's Bounty, and two others in Fort Frolic.

The "Grenadier Splicer" from later in development, by Robb Waters.

One of the first Nitro Splicers encountered in BioShock, to teach the player how to use Telekinesis.

A Nitro Splicer in the Medical Pavilion.

A Nitro Splicer in Neptune's Bounty.

A Nitro Splicer lit up by an explosion. 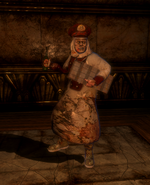 A "Ducky" Nitro Splicer with a Molotov Cocktail.

Preparing to throw a smoke bomb.