Old Man Winter is a drinkable Plasmid in BioShock Infinite: Burial at Sea. Although Old Man Winter allows the player to freeze enemy Splicers much like Winter Blast, it can also create ice traps, as well as freezing gushing water to create an icy bridge and even water puddles.

As an alternative to Plasmid injections, Old Man Winter was a drinkable Plasmid that had been created by Yi Suchong, sold exclusively in Jack Frost's Village of Fontaine's Department Store. When Suchong discovered that a "window" revealed Jeremiah Fink stealing and modifying his Plasmid formulas with an oxidation agent, Suchong retaliated by stealing Fink's formulas, and presenting this to Andrew Ryan as a drinkable Plasmid.[1] Old Man Winter had its drawbacks, in that it produced dry ice which never melted instead of regular ice.[2] Overconsumption also had drastic side-effects, forming large ice crystals around the user's body, as seen on Frosty Splicers. Some of the newer Bathysphere models apparently had a dangerous design flaw and tended to overheat. Rather than go public with this information, the company simply supplied a free sample of the Plasmid with purchase and labeled it as a promotional giveaway.[3]

Booker DeWitt and Elizabeth are first introduced to the Plasmid when entering Fontaine's Station. They see the Frosty Splicer, using the Plasmid to freeze a path for himself from burst pipes in the area. The duo soon realize that they need the Plasmid to access the Housewares department, which is blocked by another set of burst pipes. They venture to Jack Frost's Village where it is believed the Plasmid, and the Frosty Splicer, will be found. After defeating the Frosty, Booker opens the Plasmid cabinet but finds nothing usable. Elizabeth introduces her “new Plasmid”, (called "Tear") to bring in one bottle of Old Man Winter, and Booker is granted the cold making ability. 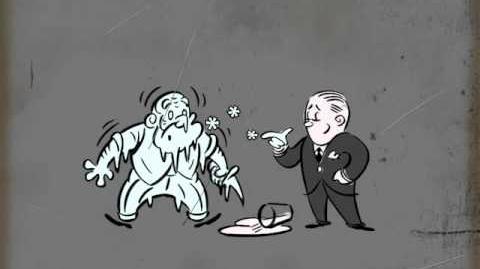 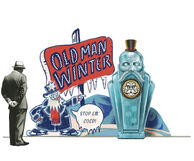 Full render of the bottle.

The original fan made poster for Old Man Winter by Trie215. 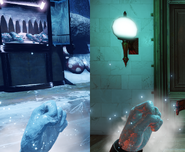 The Old Man Winter bottle from the Tear.

The Old Man Winter display in the Test-Drive.