“You will not believe me, but there was a time when this was all so beautiful…”
― Brigid Tenenbaum[src]

Olympus Heights is the tenth level of BioShock. This district was once where the upper class of Rapture had their apartments, but it was hit hard during the Civil War, leaving it in a terrible state.

Jack will have to venture through the area in order to locate samples of an antidote to remove Fontaine's mental control over him.

Olympus Heights was an area which, similar to Apollo Square, contained a central tram route to connect the residential districts to the rest of the city. The district housed some of the most well-established apartments buildings in all of Rapture, Mercury Suites and Athena's Glory. Mercury Suites contained the most luxurious and expensive apartments in Rapture, belonging to only the most successful workers and residents, including Brigid Tenenbaum, Sander Cohen and even the infamous Frank Fontaine.

There also existed a number of businesses in the district which catered exclusively to the upper class. The bistro at the center of the district offered fine food and expensive drinks to the wealthy as they passed through the tram lines on their way to or from work. The Adonis Luxury Resort, located within the area, also provided a relaxing getaway and offered a number of spa treatments and recreational facilities.

During the war, life in Olympus Heights became dangerous as the entire area became a literal war zone. Rebels from Apollo Square gained access to Olympus Heights thanks to the tram tunnels, and the district was continuously under the threat of attack. Even with increased security measures, curfews, and police barricades, almost all of the businesses in the district were left in ruins and the trams ceased functioning. As the war dragged into 1960, the violence slowed, but the damage had already been done.

After his hard fall while escaping Rapture Central Control, Jack awakens in the Little Sister Safehouse. Here in the sewers of Olympus Heights, the penitent Dr. Tenenbaum made a meager but pleasant place for eighteen little girls rescued from Sisterhood. The shelter is lightly furnished and has beds for fourteen children and one adult, books and toys to keep the girls occupied, and storage crates containing useful supplies.

Some time has passed since Fontaine's takeover of Rapture. Tenenbaum informs Jack that she's removed most of the mental conditioning, but not all. For Jack to be truly free, he must head to Dr. Suchong's apartment to look for a total cure. A little girl then escorts Jack out of the sanctuary and up to a section of the Heights' drainage basin. Alerted to Jack's presence, Fontaine mocks the futility of his endeavors and then activates Code Yellow. Jack fixes the Sewer Gate Winch by returning the Crank to its Socket, and enters Olympus Heights proper only to find that it's a sad ruin of its former glory.

When Jack exits the sewers, he finds the entrance to Athena's Glory is blocked by a huge amount of Debris and a derailed tram car. Two Splicers search through the rubble for loot. Since there is no way of entering the building, it is impossible to tell how much damage has been done, but it is unlikely that it is in good shape given the condition of the street outside it.

Located, as its name would suggest, at the center of Olympus Heights, the Central Square Bistro was a popular tavern located at the community's central hub. From here, tram tunnels connect two of the districts main residences, Mercury Suites and Athena's Glory. The entrance to a third tunnel on the west has become blocked by debris by the time of Jack's arrival, and a bulkhead on the east side provides the only entrance to Apollo Square from Olympus Heights. From the area's heightened security, scattered corpses, and general devastation it's apparent that not even the city's wealthiest citizens were safe from the chaos that ensued in Rapture during the Civil War and Atlas' attacks.

Further on is a long and winding tram tunnel leading to Mercury Suites. The entire tram system was destroyed when the major fighting of the war broke out. Now it's dark and slightly flooded. Residents and security personnel set up sandbag barriers and other defense perimeters along the system. The tunnel itself is littered with debris and corpses, but Splicers still linger in the area. One Splicer has set up a sniper's nest atop an information kiosk at the end of the tunnel.

The only accessible complex in Olympus Heights, is in a state of decay (with the exception of, and not coincidentally, Fontaine's home). Tenenbaum's home was raided by supporters of Fontaine, Yi Suchong's home was flooded and many of his confidential plans were destroyed, Culpepper had been murdered by Chief of Security Sullivan acting on orders, and Sander Cohen had locked himself in his room (just as in Fort Frolic) with his growing insanity. One abandoned apartment contains a family that appear to have died peacefully on the couch in front of a television set. However, a jar on the coffee table bears a label inscribed with a skull and crossbones, thus showing that the family turned to this unfortunate last resort to escape the spreading chaos in Rapture. This destruction shows how every citizen, regardless of class and power, was affected drastically by the war and drawbacks of using Plasmids. 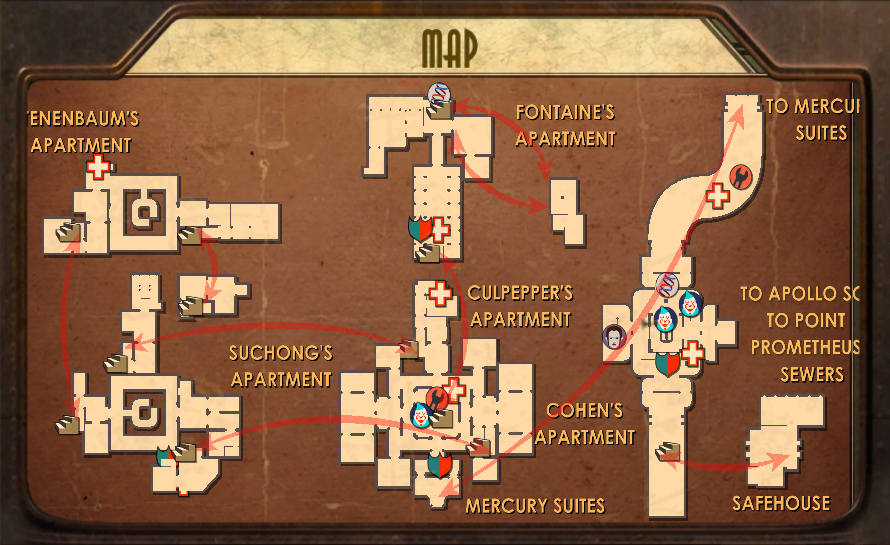 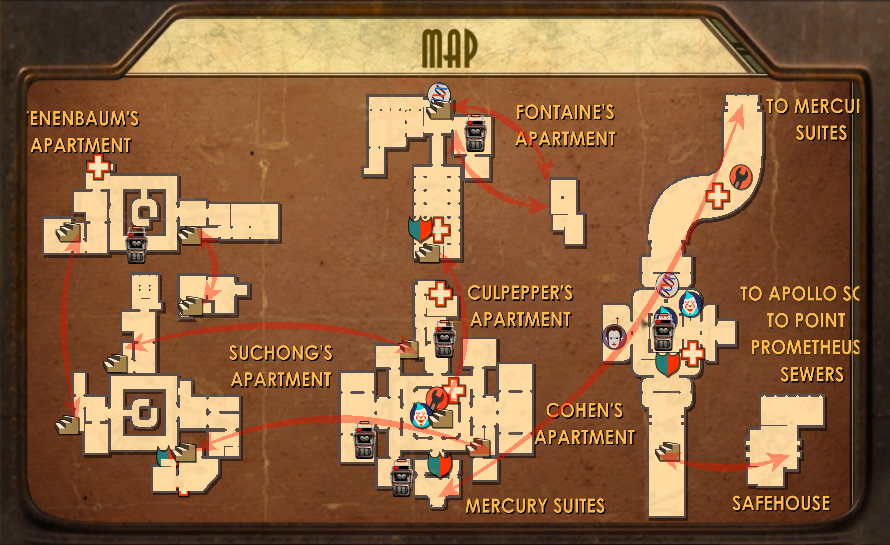 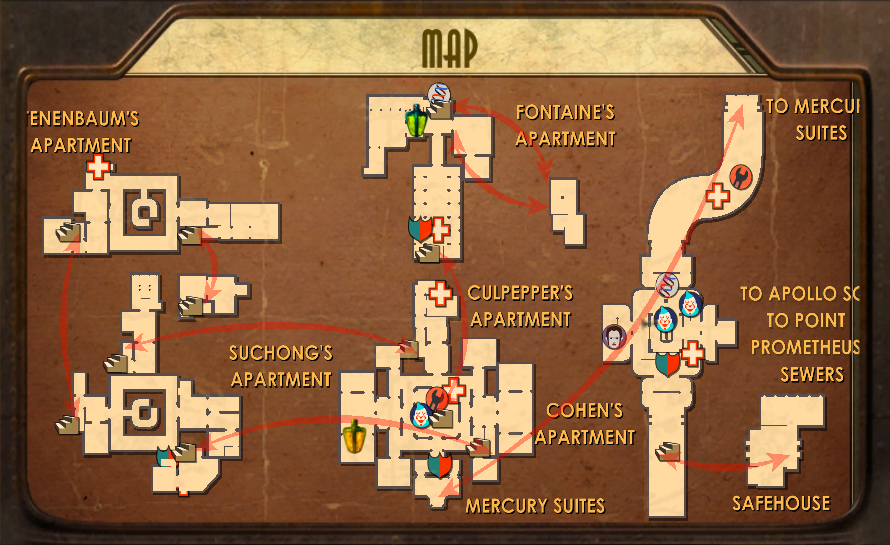 The District is mentioned a couple times during the second episode of Burial at Sea. One of the female Splicer personas Elizabeth encounters in Fontaine's Department Store is a former Miss Rapture candidate. She repeats her pageant speech along with a song while walking on a "catwalk" in Bathyspheres DeLuxe, which reveals that she was representing Olympus Heights. The Test-Drive in the Housewares department's Bathyspheres DeLuxe has been taken over by Atlas' men. Elizabeth needs to go here to obtain the Old Man Winter Plasmid and while going through, she finds a map of Rapture with possible targets for a riot. One of the suggestions is the Adonis Luxury Resort, located somewhere in the Heights.

Last stop, everybody off.