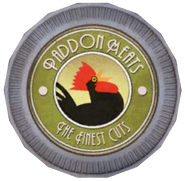 Paddon Meats is a small meat business located in the Farmer's Market of Rapture, next to Richard's Farm Fresh Quality Cheese.

In Rapture's heyday, the stand sold various slices of meat, including several varieties of the Fat Tony's brand sausage. Paddon occupied one of the larger stalls in the Farmer's Market and it appears the business prepared some of its meat fresh on-site.

When Jack reaches the market in search of Lazarus Vector components, he finds the business is a shell of its former self. A Security Camera overlooks the stand while a Machine Gun Turret keeps watch from within. At first glance, the place doesn't have much to offer aside from the spoilt meat, rotting pumpkins, some bags of Potato Chips, and a few bottles Arcadia Merlot, but there's actually a lot to collect. Andrew Ryan's audio diary Pulling Together can be found on one of the counters. There's a dollar in the Cash Register and lockbox nearby with two Shell Casings and a Creme-Filled Cake. A First Aid Kit is by the turret.

In the rear, there's a crawl space used by the staff to hold valuable items such as two Automatic Hack Tools and a trio of Proximity Mines. Climbing the rafters to reach this space will trigger a Thuggish Splicer to spawn and inspect the store's safe. The safe contains one hundred units of Liquid Nitrogen, four Frag Grenades, and twenty antipersonnel Auto Rounds.

Retrieved from "https://bioshock.fandom.com/wiki/Paddon_Meats?oldid=318224"
Community content is available under CC-BY-SA unless otherwise noted.