Parker & Co. Excelsior Brand Canned Meats is a grocery store modestly advertised in Columbia. Notably, the building in the Market District in Downtown Emporia is completely ablaze, with a seemingly oblivious woman sweeping the floor inside. If you observe the woman for a short time you will see that she phases in and out the same way as Chen Lin did when you met him in his Gunsmith Shop.

The only store still open is along the main thoroughfare of the Market District, right across the street from Lutece Labs. Inside, one can find some supplies including a Dollar Bill and a Minuteman's Armory machine. Strangest of all is the shopkeeper calmly sweeping her burning store.

She can be heard uttering stilted dialogue ranging from an enraged rebuke to a calm welcome. The shopkeeper's Tear-like condition is similar to the state of the dead soldiers from the Good Time Club and Bull House Impound. She likely died at the hands of the Vox in this universe and maybe the dead body on the counter, but was brought, living, from the previous universe when Booker and Elizabeth jump to the next reality through the Tear in the police headquarter's basement. The store's destruction was caused by the Vox Populi in their rampage across Columbia. They presumably induced an explosion from the inside, as the doors are blown outwards, which set the store on fire. The player can enter and explore the small store unharmed, as the fire blazes by the counter and food display by the window, making a pathway. The Cash Register has fallen, but the counter still has a full bottle of Salts. Behind the counter is a Veni! Vidi! Vigor!, Dollar Bill and Minuteman's Armory vending machine, the latter of which has a Lockpick on the wainscot paneling next to it.

Store in the Financial District.

Store between the Financial District and Market District.

Store in the Market District.

A Parker & Co. Excelsior Brand Canned Meats store seen in the Emporia Arcade map of Clash in the Clouds.
Add an image to this gallery

Pre-launch version of the scene in Harper's Grocery. 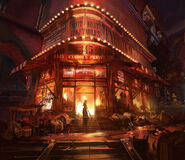 Concept art for the scene by Ben Lo.
Add an image to this gallery
Retrieved from "https://bioshock.fandom.com/wiki/Parker_%26_Co._Excelsior_Brand_Canned_Meats?oldid=314669"
Community content is available under CC-BY-SA unless otherwise noted.