Path of the Scroll

“You shall know the False Shepherd by his mark!”
― Warnings posted across Columbia[src]

The Path of the Scroll is a short stroll through the Town Center of Columbia, leading from the Fairgrounds to the Raffle Park. 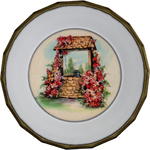 As Booker DeWitt leaves the Fairgrounds, his path is blocked by a lady and a gentleman. The duo asks Booker to flip a coin and he chooses heads. The coin lands, the pair notes the result on a sandwich board and Booker may carry on. A crowd, joined by Jeremiah Fink, can be heard singing "Goodnight, Irene".

After the flipping of the coin, Booker sees two young girls playing hopscotch and reciting a nursery rhyme about an ominous being called "the Songbird." A plush toy and a poster near by gives a precise look of this giant bird. A gazebo close to the girls has some citizens sitting by it, discussing subjects like new stock in vending machines and passers by. The street is filled with businesses but the only ones that are accessible for the player are a hot dog and ice cream stands. Further on, citizen are talking about Lady Comstock and two policemen are demonstrating a Sky-Hook while chatting about the Vox Populi. Round the corner is a open space, showing off the beautiful sky with floating decorated buildings. Two large balloons of Benjamin Franklin and Thomas Jefferson are connected to the buildings. Booker's attention is drawn to a statue of a woman that, through a shimmer of light, changes in to a man. On further investigation, the statue is of a person (or persons) called R. Lutece. A message recorded by Constance Field for a "Madame Lutece" is left on a bench by the base of the statue, along with other gifts. Some kids are playing cops and robbers near the statue. Booker sees a direction sign for Monument Island and follows it towards the Raffle. Right before leaving the path, Booker happens upon a propaganda poster showing the mark of the "False Shepherd", Booker notices the "AD" on his hand is like that featured on the poster.

The policemen with the Sky-Hook.

Change before your eyes.

"You Shall Know the False Shepherd By His Mark!"