Pavilion Station houses the seahorse-shaped trams connecting the three buildings of Fontaine's, located in the Pavilion of the department store building. In Fontaine’s heyday, the tram ran continuously, shuttling shoppers between each department.

The only thing blocking Booker DeWitt and Elizabeth's way to the Housewares department is the collapsed floor, caused by burst pipes, in between the Pavilion and its tram. After seeing a Frosty Splicer deal with a similar problem, they realize that they need to obtain the Old Man Winter Plasmid. After a visit to Jack Frost's Village they enter the tram station to get to Housewares, where Sally is located. Booker pulls the lever and the tram takes the duo on to the next building. While en route, Booker confesses how he lost Sally while gambling.

The station is located opposite to the elevator from Fontaine's Station, so customers could quickly access the different departments after arriving. Outside is a pianola which fills the area with music. The pianist mannequin stands by his piano and some generous fellow has left a gold bar and some cigarettes in his tip suitcase. The interior of the station is vast and dark, and a blue carpet leads directly to the tram at the far end. The seating area kept citizens comfortable while they waited for the tram to return (one even stayed permanently), and the player can find some valuables here, including the piece of Gear Death Benefit siting on the round bench surrounding the center left column and a lockpick behind the couch in the far right corner.

An early version of "The Tram at Fontaine's" poster, by Kat Berkley.

Concept art for the station, by Kat Berkley.

The pianola echoes through the Pavilion.

The last stop before Housewares. 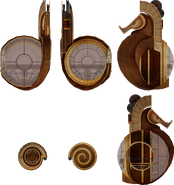