“We play for keeps.”
― Advertisement[src]

The Pharaoh's Fortune Casino was once a popular entertainment center for gamblers who visited Poseidon Plaza in Fort Frolic. Its theme and style were inspired by ancient Pharaonic Egypt, and its advertisement posters bear the golden mask of Tutankhamun. The casino consisted of two floors, both complemented by several rows of Slot Machines and two to four pool tables. During the Rapture Civil War, the Pharaoh's Fortune was closed to the public by Sander Cohen, along with the rest of Fort Frolic due to the growing chaos in the city. Amazingly, most of the casino is still intact, with minimum vandalism due to it being under the watchful eye of Cohen.

The Pharaoh's Fortune Casino is accessible to Jack during his stay at Fort Frolic. With Fort Frolic put under lockdown by Sander Cohen, the casino has endured little to no damage with the exception of a handful of looted slot machines.

Upon entering, the player encounters two Spider Splicers who descend from the upper floor. There are two cash registers to the right of the entrance, both containing 18 Dollars. There is also a safe containing 25 dollars and a first aid kit.

A Security Camera on the second level has a sweeping view of both floors. Going up to deal with the camera triggers a Houdini Splicer to enter the casino. On the pool table to the left lies a bottle of Old Tom Whiskey, a first aid kit, and the Audio Diary Bump Culpepper?, narrated by Sullivan. Aside from these items, nothing much is left in the casino except for a few bottles of alcohol on the back wall next to a painting illuminated in blue.

A sign for the casino is visible in BioShock 2's pause menu screen. In the game proper, the only time the marquee is seen is when Subject Delta looks out into the ocean vista on his way to the Atlantic Express.

An altered version of the Pharaoh's Fortune Casino can be found in the multiplayer version of Fort Frolic. It spans two floors of the level and is located in the northwest portion of the Mall. The upper level of the casino features many slot machines, several baccarat tables, and a small cocktail lounge. The lower section is "Employees Only" and holds only storage lockers and a station for fixing faulty slot machines. A flimsy wall can be broken to connect the downstairs section to the Tobaccoria next door.

The Pharaoh's Fortune Casino was one of the key locations suggested for when Atlas and his followers set their attack in motion. A photo of advertisement can be found in the Test-Drive in Bathyspheres DeLuxe of Fontaine's on a board of "Possible Targets".

A flickering sign advertising the business can be seen from the windows during the ending of the episode.

An advertisement for the casino. 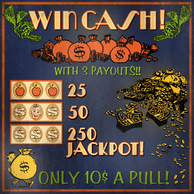 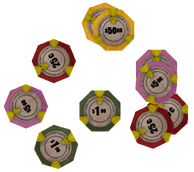