“We bred little ones to imprint to certain smells, the pheromones. But this is not like putting on aftershave. You'll need three industrial applications of this stuff, und then the little ones will be drawn to you like a bee to honey.”
― Brigid Tenenbaum[src]

The Pheromones are a plot-specific item in BioShock. They are used on Big Daddies in order to attract the Little Sisters. The scent of the pheromones is disagreeable to the human sense of smell, but the Little Sisters find it attractive for reasons unknown.

The Sea Slugs that produce ADAM work at peak efficiency when implanted in children. Biologist Dr. Yi Suchong was well aware that the task of getting young girls to carry out the grim task of ADAM collection would be difficult, but knew they could be manipulated.[1] One part of the process involved using special pheromones to attract the Little Sisters to the Big Daddies who would protect them from the dangers of Rapture.

When Jack reaches Point Prometheus, he finds the road ahead blocked. The only way to move forward is with the aid of a Little Sister. Brigid Tenenbaum instructs him to disguise himself as a Big Daddy to win the Little Sister's trust.

Five samples of pheromones can be found in the Little Wonders Educational Facility, but Jack needs to only acquire three to partially become a Big Daddy. The two on the upper floor can be found on top of desks overlooking holding rooms 2 and 5. On the lower floor, the samples are located inside holding rooms 5 and 7. In the latter room, the vial can be found on a cabinet. In the former, it's beside a teddy bear being inspected by a Houdini Splicer. The last one is inside the back of the surgery room on a desk near Safecracker 2. 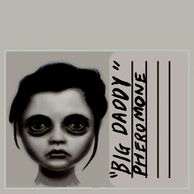 The label on the flask.

Model render of the flask.