The Splicer model Pigskin is a American football player who possibly had pressure to Splice to be a better athlete, as suggested by dialogue regarding him trying to impress his coach, parents, and other authority figures like Andrew Ryan. Based on posters and burned versions of their skin variations, the teams of the Stingers and Sea Bulls had survived during a fire that cancelled their game, and possibly destroyed their stadium, possibly near the Farmer's Market. There's also other teams, such as Ryan's Raiders (a team mentioned in one of the many public address announcements), and, as some shirt designs state, the Atlas Astros. Unlike most Splicers, they seem to have, at least, partial awareness of what has befallen them and Rapture. However, this does not mean they are sane in any way, and they are still forced to fight the player by Ryan's command.

The following are phrases that the Pigskin Splicers will say in BioShock. The name of the source audio file is listed, when known.[Audio files needed]

Pigskin wears the uniform of a young football player. It consists of black cleats, socks, sports knickers with a lace-up fly, a team jersey, and a traditional leather helmet. Splicing and the Civil War have taken a toll on Pigskin; his face is sagging, wrinkled, and leathery and his nose has been broken backward. His uniform is quite disheveled: his right sock is sagging, the cuff on his jersey's right sleeve is torn, he has a tear along the bend of his left elbow, and a bullet hole in his right pectoral region. The left part of his jersey is hanging by a thread exposing his chest guard and left shoulder pad. All variations have differing amounts of blood, soot, or fire damage on them from the events at the stadium. Also, the vague outline of the word "Atlas" can be seen across the jersey on each one. Pigskin's hair and eyes are brown. He doesn't have any accessories.

Model 1: The primary model wears the uniform of the Atlas Astros: a purple jersey with a white lightning bolt and circle, buff colored pants, red socks, and orange leather helmet and pads. The soot on his uniform covers the team name. It's likely that the team sharing its name with the revolutionary Atlas is a coincidence, as a team devoted to Atlas probably wouldn't have been sanctioned.

Model 3: This model also wears the uniform of the Stingers. This Pigskin is completely charred from the waist up and also covered in blood, even his face is black from ash. The soot covers his leather pad making it appear like his jersey isn't torn.

Model 4: This model wears the uniform of the Sea Bulls: a green jersey with a mascot bulldog in a yellow hat, white pants, red socks, and an orange and black striped helmet and pads. He seems to be suffering from vitiligo.

Model 5: This model also wears the uniform of the Sea Bulls. His body is covered in patches of black and gray ash on his right knee, torso, left arm, right face, and hands.

Model 6: This model wears the uniform of an unnamed team: a red jersey with a red rocket in a white circle, white pants, and red socks. His body is covered in patches of gray ash along his legs, arms, and hands. His helmet is so covered that its color can't be deduced.

Model 7: This model also wears the uniform of the unnamed team. This Pigskin is covered in blackish ash and blood from the waist up, but it appears that his helmet is red and white striped.

The original concept sketch for Pigskin. 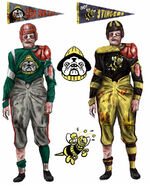 Concept art by Robb Waters of two Pigskin models: the Sea Bulls and the Stingers. 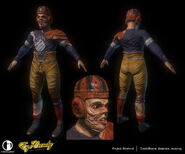 The in-game model of the Pigskin as seen in BioShock.

A poster of The Big Game, as seen in BioShock 2 Multiplayer.

The same poster for the Pigskin game, cancelled due to fire.

Pigskin seen in the Insect Swarm training video.
Add an image to this gallery

Retrieved from "https://bioshock.fandom.com/wiki/Pigskin?oldid=319397"
Community content is available under CC-BY-SA unless otherwise noted.