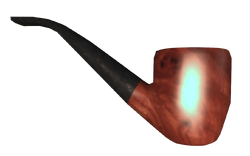 The Pipe is a consumable item found in Rapture during BioShock, that reduces the player's Health, but restores a bit of EVE. They are essentially identical in function to cigarettes.

The player can find a pipe in the back room of Eve's Garden where Jack finds the corpse of Jasmine Jolene. The pipe most likely belonged to Andrew Ryan, who was having an affair with Jolene. A pipe can also be found in the Sir Prize Casino under the Audio Diary, Fontaine's Army.

Retrieved from "https://bioshock.fandom.com/wiki/Pipe?oldid=307090"
Community content is available under CC-BY-SA unless otherwise noted.