BioShock Wiki
Register
Don't have an account?
Sign In
Advertisement
in: Quotes without a source, Spoilers, Plasmids,
and 5 more

“Pick your Plasmid and evolve!”
― Mural advertising Plasmids in Rapture[src]

Plasmids are special serums made from processed ADAM that introduce modified stem cells into the body, allowing for genetic modification and mutation, giving the user what some might call "super powers". Active Plasmids require EVE for use, while passive Plasmids, called Gene Tonics, provide an effect merely by being equipped. Plasmids are powerful, but excessive use of them leads to physical and mental addiction and instability. This was a major factor in the eventual downfall of Rapture society.

When Brigid Tenenbaum discovered the properties of ADAM and was seeking Frank Fontaine's help for financing and equipment, the latter introduced her to Yi Suchong, another brilliant geneticist. Together, the two scientists developed the first Plasmids for what would eventually become Fontaine Futuristics, Fontaine's own science company. Plasmids were first introduced to Rapture's consumers as domestic aids (start a fire instantly, pick up objects from a distance, light a lamp by zapping it with electricity, etc.) although their use could still be distorted into harmful ways.

This reality became apparent when Rapture's security forces were confronted with groups of Splicers[1] while conducting an arrest of Fontaine and seizure of his properties in connection to the smuggling ring.[2] With Fontaine's presumed death in the shoot-outs, the Central Council transferred stewardship of his ADAM product company to Andrew Ryan and Ryan Industries. This takeover was objected to by parts of Rapture's population rejecting government involvement in business and those believing in Fontaine's charity works. This led to tensions growing in the city.

“Imagine if you could be smarter, stronger, healthier. What if you could even have amazing powers, light fires with your mind… That's what Plasmids do for a man.”
― Atlas

Preparing for the disorder to come, Ryan started marketing ADAM products to be used for citizens' home defense under his own company's brand. A civil war erupted after Atlas's followers bombed the 1958 New Year's Eve celebrations at the Kashmir Restaurant. The use of Plasmids evolved into a genetic arms race[3], as both sides of the conflict further equipped themselves. Field tests were conducted by Sinclair Solutions on more powerful and diverse Plasmids and Tonics. The population degenerated into insanity as side-effects of ADAM overuse became endemic. Ryan finally resorted to adding mental control pheromones into his products to influence the Splicers and win the war against Atlas.

An Alternative to Injections[]

Before the civil war, Suchong worked on a new form of Plasmid which used oral ingestion rather than injection into the bloodstream. This method, while better from a marketing standpoint, required use of at least ten times the previous quantity of ADAM, and Fontaine recalled the production because of the excessive cost in raw genetic material.[4] When Fontaine Futuristics passed into Ryan's hands, the latter re-introduced them for sales as a painless alternative to the original injectable products and under the Ryan Industries brand.

The idea itself was exploited by Jeremiah Fink, a businessman using trans-dimensional technologies to plagiarize scientific wonders from the neighboring reality, to create his own Vigors. Fink stole Suchong's work on ADAM and improved it in his own laboratories, though ironically the scientist was able to profit from this situation and proposed the idea to Ryan as his own after taking notes of Fink's procedures.[5] Their production in Rapture was abandoned sometime during the civil war when ADAM became a valuable resource to win the conflict and shortage was burdening both sides. 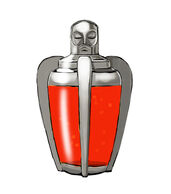 Concept art for the Plasmid bottle. 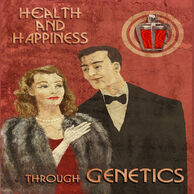 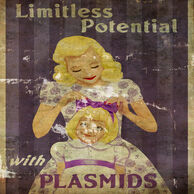 A shot from the Incinerate! training video.

A Plasmid Mod upgrade in Burial at Sea - Episode 2.