Transcript: Brother, I have told you many times that I encountered this particular Caesar before he crossed the Rubicon. When I met Comstock, he was little more than a preacher, able to move both members of the flock or members of Congress with equal dexterity. He believed in my work, and his influence bought the funds I so needed. And if he wanted to use Tears to play prophet, that was his prerogative. But at some point, the man became incapable of distinguishing his performance from his person. I sit in judgment -- but then again, it was I who built the stage.

Location: On a desk to the right of the Lutece Device. 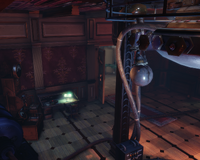 Retrieved from "https://bioshock.fandom.com/wiki/Playing_Prophet?oldid=291216"
Community content is available under CC-BY-SA unless otherwise noted.