“We need a coal porter here to haul a half ton of coal from Fink Manufacturing to Shantytown.”
― Auctioneer[src]

The Plaza of Zeal is the primary area of Finkton. This central hub is the busiest part of Fink Manufacturing as it connects most of the main areas of the workhouse together. Booker DeWitt and Elizabeth must enter here to find Chen Lin and gather weapons for Daisy Fitzroy and the Vox Populi.

Booker and Elizabeth illegally enter Finkton Proper via the service elevator in the Worker Induction Center. Though they've done their best to maintain a low profile, they realize Jeremiah Fink himself knows about the duo's movements as he calls them on the lift's phone. Fink is surprisingly welcoming to Booker and states that he looks forward to meeting him.

As the elevator continues to descend, Booker and Elizabeth get a view of Fink MFG's corporate culture: golden statues dedicated to Fink tower above factories, workers toil in squalor, and Fink propaganda extols the values of regimented labor. As the car reaches the bottom, the pair are greeted by Fink's associate Mr. Flambeau who offers them some useful supplies including a purse of Silver Eagles, a lockpick, a phial of Salts, a Medical Kit, and the Hand Cannon.

The Plaza and the Clock Shop[]

The two enter the Plaza of Zeal and find it to be a hive of activity. At the center is a large board marked "Employment", listing various unskilled jobs (coal porter, waste collector, sewer bricker, etc.) and a man auctioning them off to Fink MFG employees. The workers are in the midst of a bidding war for who can complete the job in the shortest amount of time (failure to complete the task in the promised time results in forfeit of pay). The laborers are so desperate for work that one beats a man unconscious to take his job (the barker rewards this behavior).

Small workshops and tram tracks wrap around the plaza while workers assemble items like barrels and rivets in the open-air plaza. In the southeastern quadrant of the plaza is the Clock Shop. There's a Lockpicking Kit and a couple of Silver Eagles in front of it, but inside is a lockpick and Vox Cipher. Elizabeth suggests searching the impound for the needed Code Book. Once it's found, the hidden cache contains an Infusion, a Locksmith Bag, a Voxophone, and a Volley Gun.

Much of the Plaza is closed off at first. To the left is the entrance to the Factory, but it's locked up tight; Elizabeth remarks that she's never seen such a complex lock. To the right is the Factory Worker Housing, dubbed Shantytown, but the path is blocked off by fallen shipping containers. At the far end of the plaza is the entrances to the Good Time Club, but it's blocked off by posted police officers, a set of Gun Automatons, and a Mosquito that circles overhead. In the sweatshop in the northwest corner is a lockpick and a "Time Tear" blasting music. Though none of the characters in the game know what music is playing, it's the 1960s song Fortunate Son by Creedence Clearwater Revival.

Attached to the central clock tower is Chen Lin's gunsmith shop, inside of which is a lockpick. At the top of the shop is a piece of Gear that can be accessed by climbing the Sky-Line near the entrance.

Whether Booker engaged in combat with the enemies earlier or not, he and Elizabeth emerge from the gunsmith shop to find the plaza deserted. Suddenly, a Handyman leaps out and attacks. Once Booker defeats the bruiser, he drops a piece of Gear, Elizabeth commends Booker's skill in combat, and they head off to the Good Time Club.

After Booker and Elizabeth make it to the Good Time Club, they find Chen Lin dead; murdered by his interrogators for his connections with Fitzroy. Hope seems lost, but Elizabeth finds and opens a Tear to a different reality. In this Columbia, Chen Lin is currently alive and the Vox Populi and the poor are even more heavily persecuted. The duo return to the Plaza of Zeal and are immediately beset by armed forces. Soldiers attack from all sides while a Beast fires with a Volley Gun. Once the dust settles, Elizabeth spots a distressing difference on the employment board: all jobs read "Kill the False Shepherd." They proceed back to the gunsmith shop.

After meeting with the Lins, Booker and Elizabeth head out towards the Bull House Impound in Shantytown. Upon returning to the plaza, they are again attacked by the Flying Squad. The path to Shantytown is now unblocked and, after taking out the guards, they take the elevator down to Shantytown.

After a truly trying ordeal, Booker and Elizabeth are forced to pass through another Tear to a version of Columbia where Chen Lin's tools are back at his shop. However, they soon discover that in this Columbia, the Vox Populi have staged an uprising against Fink MFG. Aided by the Vox, Booker fights his way through the opposition as he makes it back to the Plaza of Zeal. They pass through the Shantytown entrance to find the plaza becomes a battleground between the Founders and the Vox Populi.

The pair return to the gunsmith shop only to find Chen and Sarah Lin lying together in a pool of blood at the shop entrance. Elizabeth is devastated, Booker convinces her to follow him to the Factory so they can reclaim The First Lady from Daisy. As they head out, a group of Vox agents cut open the locked gates to the Factory and head into the antechamber. Booker and Elizabeth join the charge, leaving the Plaza of Zeal behind for the final time.

In the Private Quarters of Jeremiah Fink, specifically in the "Sleep" quarter, Elizabeth will find several security screens observing various areas in Finkton, now being destroyed by the Vox Populi. One of these screens depicts the employment board in Plaza of Zeal on fire, meaning that shortly after Booker DeWitt and Elizabeth left the area, the Vox set it ablaze. 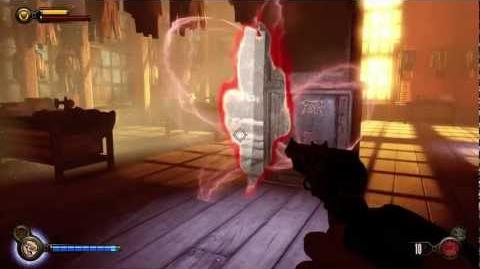 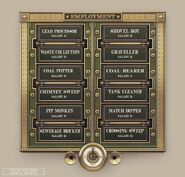 Concept art for the employment board.

Jobs being auctioned off.

A "Time Tear" in the Plaza of Zeal. 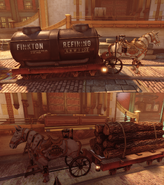 The Vox dealing with a lock.