Columbia's Best Popcorn is a popular snack in BioShock Infinite. Eating it will restore a small part of Booker DeWitt's health. It features a small flag of Columbia on every bag.

A very abundant consumable, hot buttered popcorn can be found at vendors and laying around in the environment. There's even a box in the Specimen Observation in the tower on Monument Island.

A single box of Popcorn can be found on High Street in The Watched Clock Plaza. The name is now Rapture's Best Popcorn and the flag on the box only has red stripes. 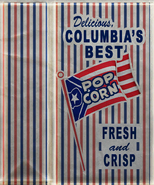 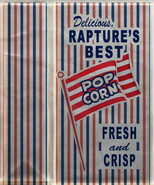 Rapture's Best Popcorn.
Add an image to this gallery
Retrieved from "https://bioshock.fandom.com/wiki/Popcorn?oldid=323383"
Community content is available under CC-BY-SA unless otherwise noted.