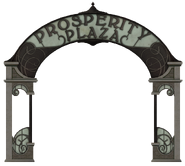 Port Prosperity is the primary docking area for Emporia, where most of the district's Sky-Lines are located connecting with the Grand Central Depot and Downtown Emporia. It contains both Prosperity Plaza and Port Prosperity Station. By the time Booker DeWitt and Elizabeth arrive, the Vox Populi have torn through the place.

Heavily damaged from an encounter with the Songbird, after a hidden statue aboard the ship whistles its summoning song, The First Lady crash lands on the outskirts of Prosperity Plaza. Dazed, but alive in the wrecked airship, Booker comes to and sees Elizabeth attempting to open the jammed door. A familiar couple plinks out a tune on a player piano, arguing over the correct notes.

Elizabeth realizes with horror that the Luteces are attempting the same tune played by the statue which inevitably calls the Songbird. Once Booker helps her with the door, she leaps out just as the call song is completed. Upset, she nervously scans the skies for the Songbird. However, the couple remark matter-of-factly:

"The notes were correct.
The instrument was not.
One needs both to get his attention.
But if you know how to sing to him…
He will take you where you need to go."

Satisfied that her experiment has paid off, the lady asks, "Would you care to hear anything else, brother? Perhaps a waltz?" The pianola jumps to life playing Schubert's "Valse Sentimentale No. 1" as she nonchalantly hums along. The gentleman then offers a card detailing the Songbird Defense System, which shows a diagram for the singing statues and its internal Whistler. Booker wonders aloud that if Comstock uses songs to control the Songbird, are there any others which render him more docile? The lady recommends they ask "the maestro himself."

Upon looking up from the card, the couple has vanished again. After Booker moves the piano out of the way, Elizabeth spots Comstock House in the distance. She reasons that it is likely where the "maestro" can be found. Their destination now determined, the two set out.

Throughout Prosperity Plaza, panicked citizens are crowding the quays, seeking passage on the last barges away from the terror of the Vox Populi. A woman stands petrified on the dock as her husband urges her to make the jump onto the barge. Newspapers mentioning the recent sinking of RMS Titanic litter the ground, an eerie parallel situation of the passengers waiting for the last "lifeboats". There is no RMS Carpathia for the Columbia citizens.

As Booker and Elizabeth negotiate the stairs leading to Port Prosperity Station, the barge driver declares that he cannot take any more passengers or weight. The quay lies devoid of people with personal belongings and overstuffed steamer trunks lie abandoned.

There are two pathways leading into Port Prosperity Station: a bridge and gentle slope to the left, and a set of stairs on the right. Both are heavily guarded by Vox. Near the stairwell is a Minuteman's Armory. A nattily-dressed refugee attempts to escape the grasp of a member of the Vox Populi. He offers to buy his safety, but the Vox sneers at the pittance and pushes the hapless citizen down the stairs, after which he lies motionless.

A battle develops, and there are several Tears that Booker can use to his advantage. Elizabeth can provide additional cover on the slope to the left, while the stairs on the right provide Medical Kits. A Mosquito can also be summoned, as can a water puddle in front of the building. The fight escalates as a Beast armed with a flak cannon provides supporting fire, while another barge brings reinforcements.

After dealing with the enemies, closer examination of the plaza reveals more evidence of the Vox's merciless treatment of unlucky citizens who got in their way. There is a luggage cart overburdened with trunks, with its owner lying facedown in a pool of blood. A lockpick and some coins are strewn about.

The door to the Port Prosperity Station building is locked. As Elizabeth fiddles with it, she reminisces about the Songbird. The song was always a signal that brought her captor. When she was younger, she viewed him as a friend who brought food and books. But as she grew up, she began to see him as her warden. 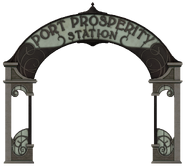 The once immaculate station building has seen better days. It served as the transit hub between the Grand Central Depot and the arrival and departure docks in Prosperity Plaza. The centerpiece on the torn up marble floor is a crumbled statue of Comstock now surrounded by red Vox banners. A board displaying Founders scalps mocks: "Tell Us Prophet: Do You See Us Coming?" Among the scalps are Marlowe (inventor of Murder of Crows), Saltonstall (politician), Jeremiah Fink, Vanderwald, H. Clark, and Flambeau (a Fink associate seen before). There is a place reserved for Comstock himself.

The rest of the lobby features a Dollar Bill and a Veni! Vidi! Vigor! machine on each side of the shuttered ticket window. The wall above the entrance has a ghostly Freight Hook tear which can be used to access a Shotgun, a lockpick, some money, and a Gear. One gate hangs open, but the other is locked, which Elizabeth can open. Amidst the luggage and the rubble is a washbasin with an Infusion bottle.

Walking into through the other gate, Booker and Elizabeth sweep by abandoned luggage and debris, and come across two Vox Soldiers dragging bodies across the floor. Past them is the Gondola station to Grand Central Depot and the formal entrance into Emporia. Elizabeth asks Booker about whether he believes that Comstock can predict the future. Booker replies with his dream about a fiery version of New York while Elizabeth demurs.

A Telescope can be found at the end of the pier looking towards the Emporia sign and Comstock House. The now-vacant Gondola features two driving cabins and is plastered with posters cheerily advertising the Sky-Hook and the Sky-Line. The rear cabin contains a white-shirted and black-tied operator who committed suicide with a Hand Cannon. The front cabin must be unlocked by Elizabeth, and contains a Sniper Rifle and the lever to start the ascent to Grand Central Depot.

Gondola to the Grand Central Depot[]

As the Gondola slowly climbs its way into the Grand Central Depot, Elizabeth suddenly recognizes the gentleman and lady who mysteriously appear on the platforms of the advertising billboards along the skyline. They are Rosalind and Robert Lutece. Rosalind was the scientist responsible for the technology that keeps Columbia afloat: "Quantum particles, suspended in space-time from a fixed height."

Elizabeth marvels at their reappearance, but questions why, as her books repeatedly state that they had vanished from society years previous. The Luteces, in the meantime, perform mundane/ordinary activities on the vertigo-inducing ledges: playing baseball, arguing over the subjective tense, and waltzing to the tunes of a gramophone.

Elizabeth quips, "Something tells me they're not exactly what they appear." As the Gondola passes, Rosalind is posing for a painting, but Robert seems to have painted a portrait of himself on the easel. They remark:

"Odd, isn't it?
What's odd?
The fact that we sometimes…
finish each other's sentences?
Exactly.
It would be odder if we didn't."

Loved ones pleading others to make the jump.

Founder scalps nailed to a headboard.

A friendly Motorized Patriot from a Tear.

Both Motorized Patriots engaging each other.