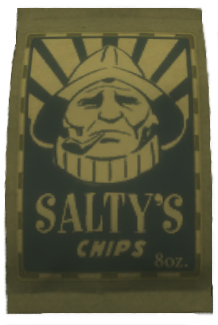 “Captain Salty, a man of the sea. The perfect potato chips? Captain Salty's they be!”
― Salty's Chips advertisement[src]

Salty's Potato Chips are a snack that can be found in vending machines, on corpses, and other places around Rapture. They heal a small amount of Health when consumed. When used with the Extra Nutrition Tonic, they will restore much more health.

Retrieved from "https://bioshock.fandom.com/wiki/Potato_Chips?oldid=320257"
Community content is available under CC-BY-SA unless otherwise noted.