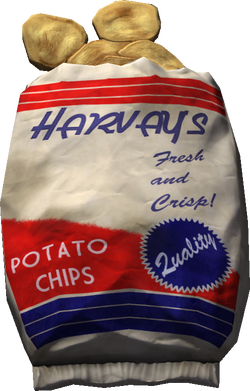 Harvay's Potato Chips are a salty snack manufactured in Columbia.

Somewhat uncommon, potato chips can be found out in the open and be looted from corpses and trash cans. Like all food and drink, it is consumed immediately upon being picked up, and restores a small amount of Booker DeWitt's health.

While Salty's Potato Chips are the more well-known potato chips brand in the city of Rapture, Harvay's seems to be a competitive brand, as a bag can be found in places like The Daily Bread in Fontaine's Department Store. In actuality, most all of the consumable items in Burial at Sea Episode 1 simply reuse the same textures as items from Columbia.