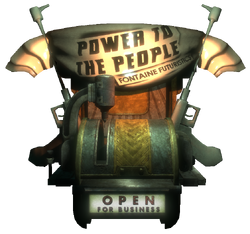 “A gun in every home, peace on every street.”
― Frank Fontaine, on installing the first Power to the People machine[src]

Power to the People is a one-time use weapon upgrade vending machine. They are scattered throughout Rapture. Each gives one upgrade to a weapon of the player's choice, after which the station cannot be used again. The first Power to the People machines were installed in 1957, created by Fontaine Futuristics.[1] They were installed as protection for the citizens of Rapture, although they may have been built by Frank Fontaine in a cynical and self-serving attempt to spur armed conflict between the citizens of Rapture. They were used by various combatants many times during the war and were a successful business venture for Fontaine Futuristics.

It's possible to collect 12 upgrades in total thus upgrading every weapon twice.

Effect: Extends the Chemical Thrower's range, allowing the player to fire a stream from one end of a room to the other.

Effect: Dramatically increases the odds that the Crossbow's Bolts won't break after firing, allowing the player to recover and reuse them.

Immunity to self-damage from grenades

Effect: Renders the player immune to the splash damage dealt by their own Grenades. Note: It is safe to walk past one's own Proximity Mines without this upgrade. However, if they detonate near the player, only this upgrade will prevent Jack from taking damage.

Effect: Reduces the recoil produced by the Machine Gun when being fired continuously.

Effect: Quadruples the Pistol's magazine size, allowing the player to fire 24 shots without reloading instead of the standard 6.

Effect: Converts the pump-action Shotgun into a semi-auto, effectively quadrupling its rate of fire.

Note: The player must let Cohen live when he was in Fort Frolic to be able to get into this room, otherwise it will be locked, and they will not be able to access the machine. Sander Cohen's apartment can be seen at the lower left of the corner of the map, on the west side square. Basically, go into Cohen's apartment on the first floor, and if the player disrupts the dancers (such as by knocking over the gramophone or killing the dancers), Cohen will come down from his private quarters and open the door for the player. Through the door, at the top of the stairs, turn left and the player will see the machine right there.

Power to the People stations have returned in the sequel, and are able to upgrade Subject Delta's arsenal. However, the upgrading structure has changed: each weapon now has three upgrades, and the third can only be purchased if the player already possesses the first two.

Note: Although there are 14 Power to the People stations (2 more than in the previous game), there are 18 possible upgrades in total, forcing the player to choose which weapons to specialize in. Moreover, unlike in the original BioShock, it is now impossible to backtrack to earlier levels, so remember to use the Power to the People machines in a level before moving on.

Effect: Causes projectiles to be reflected back at attackers while the Drill is spinning.

Effect: Increases the amount of Grenades the player can carry for the Launcher.

Effect: Renders the player immune to the splash damage from their own explosives. NOTE: This upgrade isn't required to disarm and retrieve one's own Proximity Mines.

Effect: Causes each bomb to explode into several smaller bombs upon detonation.

Effect: Causes every .50 Caliber Round to ricochet off of hard surfaces.

Effect: Extends the Rivet Gun's clip to eighteen shots before having to reload, up from the original twelve.

Effect: Grants each Rivet a chance to set the target on fire.

Effect: Triples the Shotgun's clip size, allowing the user to fire six shots before having to reload instead of the original two.

Effect: Gives each Shell a chance to electrocute the target.

An early version of the machine, along concept art by Mauricio Tejerina.