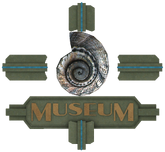 “You won't believe your eyes!”
― Postcard for Point Prometheus[src]

The Proving Grounds is the penultimate level of BioShock. Jack must run the gauntlet through a derelict museum while protecting a vulnerable Little Sister in order to gain access to his final opponent at the top of Point Prometheus.

Originally before the Civil War, the Armored-Escort Proving Grounds was known as the Memorial Museum of Point Prometheus, a grand establishment where citizens could visit and learn about ancient fossils and the splendors of the surrounding sea. After Big Daddies were assigned to become the protectors of Little Sisters, the entire location was closed to the public and hastily converted into a training area for Protectors and their Gatherers. The complex is topped with a dome, and the tower at the west end is the tallest structure in Rapture.

The Museum is one of the most powerful visuals demonstrating Rapture's fall. What was once a showplace of knowledge is now reduced to a corpse-ridden training gauntlet, sacrificed for the sake of the conflict and partially flooded. While a few of the exhibits have been stored in the Gift Shop, most have just been left in their displays and are now damaged. The winding hallways of the Proving Grounds are littered with fresh corpses from which Little Sisters gather ADAM while the Big Daddies protect them. Jack must follow a Little Sister to get through specially locked doors to get to Fontaine. To Tenenbaum's chagrin, the Little Sisters mental conditioning still forces them to stop and harvest ADAM before leading Jack on. These Little Sisters are no longer implanted with a slug, and are therefore physically vulnerable to attack. Gathering sessions are the focus of the mission in this area: the player escorting the girl safely through the Proving Grounds' linear route (divided into sections by locked "Little Sister doors"), while defending her from Splicers, Turrets, and finally a rogue Bouncer. Meanwhile, Fontaine keeps splicing himself to become more powerful in preparation of his confrontation with Jack.

The museum is accessed from point Prometheus through a large lobby, with stairs leading to the entrance and a large skylight above. Leaks in the ceiling allow water to cascade upon the stairs. Two mobile blockades are positioned in the middle, marking the security checkpoint left abandoned by the facility's guards. The next hall leads to the gift shop and the central atrium and has a Vita-Chamber and a U-Invent machine.

The gift shop is in a state of disrepair and has mostly been picked clean except for a few Pep Bars and Cigarettes. Several fossils are in display such as a trilobite pillar, next to a functioning Circus of Values.

The central atrium opens to the hallways of the Memorial Museum. Two whale skeletons hang under a curved glass ceiling. There's no time to appreciate the grandeur to the room, though, as a pair of enemies are exchanging gunfire in the atrium. Below, a Baby Jane is seen duking it out with a Rosie. The Big Daddy shoots the Splicer down but, in her death throes, she fires her machine gun at the ceiling. This causes one of the skeletons to come loose from its cables and crush the Big Daddy as it falls.

The path goes from the East balcony to the North halls, back to the atrium, through the North halls and the West balcony before ending at the special exhibit entry. Several fossils are exposed on the lower floor as well as a basking shark in a display. Two turrets are hidden behind moving panels, sweeping the lower floor. Two doors on the upper floor lead to blocked hallways. Also the tower of Point Prometheus can be seen on the West side, overlooking the atrium. On the second time through the Central Atrium, a Bouncer is seen on the North balconies, threatening Jack before rushing to a door to the North Exhibit Halls.

The first hall has a collection of corals and fossils, though most are either damaged or missing. A model of a giant angler fish lies inside a tank in the middle of the hall, and there is a large menacing shark jaw at the end. Facing the tank is the first "test subject," an ADAM corpse for the Little Sister to train herself, which she does compulsively as she guides Jack. Her gathering doesn't go unnoticed and hordes of Splicers appear to attack her.

The second hall has mostly empty displays and a long bench engulfed in flames. There is another test subject station prepared for the Gatherer, though it is guarded by both a Security Camera and a Flamethrower Turret. A Gun Turret lies before the door to the atrium and is a long range threat to the little Sister.

The lower floor of the first hall is flooded, making it hard to progress while knee deep in water. Several Splicers lie in ambush under the flood, ready to attack anyone entering the water. Several models of fish species and crabs are exposed, with a large basking shark cut loose from its hanging support in the middle of the hall.

The second hall has large hunting trophies of mammals, the only earthbound displays seen in the museum. The last ADAM corpse is lying on the lower floor, guarded by a Security Camera but with a needed Health Station in reach. Outside the window, a building has begun to collapse, its lights still flickering. At the end near the upper door to the atrium, the rogue Bouncer seen earlier breaks through the wall of an empty display and angrily charges Jack.

At the end of the Proving Grounds is the entry to the special exhibit inside the museum's tower. The lobby opens to a single elevator going up to the top of Point Prometheus, the highest point in Rapture, and where Fontaine has been cornered. All kinds of vending machines are stored in the lobby, with several rare ammunitions scattered around. The Little Sister who guided Jack so far parts with him there, and gives him an ADAM harvesting tool to drain Fontaine, now over-spliced, of his ADAM.

This map is interactive. Click on an icon to find out more about it, or choose a tab above to see a different map.

The entrance to the museum and the gift shop.

A view of the gift shop from behind the tills.

The upper level of the Central Atrium.

The damaged displays of the North Exhibit halls.

Traps around every corner.

The elevator to the top of Point Prometheus, and Fontaine's Lair.
Add an image to this gallery

Retrieved from "https://bioshock.fandom.com/wiki/Proving_Grounds?oldid=317775"
Community content is available under CC-BY-SA unless otherwise noted.