“We believe in the Daughter of the Lamb, hallowed savior and anointed vessel, whose blood with our blood, sin with our sin, mind with our minds, life with our life, lifts us up from the depths, transcends base temptation, and delivers us all from ego.”
― Simon Wales[src]

Pumping Station 5 or the Temple of the Lamb houses a pumping station in Siren Alley. It is the center of operations for Father Simon Wales' underground church and the Rapture Family. Subject Delta is required to go here to drain Dionysus Park. 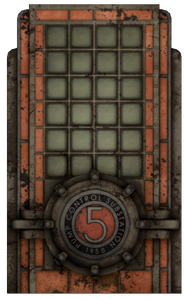 Pumping Station 5 is the main pumping station for the nearby area, including Siren Alley and Dionysus Park. Sofia Lamb cultivated a following by tending to the most desperate of Rapture's citizens and Siren Alley was an ideal base of operations. She set up an office in the pumping station and Simon Wales began to proselytize. The large, open space now primarily serves as the base of Simon Wales' chapel.

Main article: BioShock 2
“…But the Beast is upon us children. It wears a hide of iron and its hands are death and change.”
― Simon Wales[src]

In order to unseal Dionysus Park, save Augustus Sinclair from drowning, and continue on his mission to reach Eleanor Lamb, Delta must jury rig the controls in Pumping Station 5 to drain Dionysus. That puts him smack dab in the middle of the Rapture Family's principal site of worship.

Temple of the Lamb was a secret church for the Rapture Family overseen by Simon Wales. It is where Father Wales and his cult worship Eleanor Lamb becoming the future of Rapture and Mankind. Subject Delta enters the place and fights his way through hordes of Splicers, killing Father Wales in the process. When Sofia Lamb overrides the pump system, the Temple, along with the rest of Siren Alley, becomes completely flooded.

The location contains an altar, many portraits, shrines and even Eleanor's dress conserved in a glass case, adding to several other Eleanor related objects found around Siren Alley, such as Big Daddy dolls and Little Sister ADAM syringes. There is also a worshipful mural of Jack injecting himself with an EVE Hypo.

Lamb's Hideout consists of two offices. The first one contains a Power to the People vending machine. The second contains many children's drawings, hinting that Eleanor Lamb probably spent a bit of her childhood here.

Concept art for Temple of the Lamb.

An early version of the Temple of the Lamb.
Add an image to this gallery

The pathway of pilgrimage.

The massive generators beneath the pump pipes.

A corpse beneath the chains.

Step forward into the light.

The painting at the altar.

The altar of the Temple of the Lamb.
Add an image to this gallery

Retrieved from "https://bioshock.fandom.com/wiki/Pumping_Station_5?oldid=305418"
Community content is available under CC-BY-SA unless otherwise noted.