BioShock Wiki
Register
Don't have an account?
Sign In
Advertisement
in: Quotes without a source, BioShock Infinite Weapons
English

The Barnstormer, known in-game as the RPG, is a heavy artillery weapon in Booker DeWitt's arsenal in BioShock Infinite. Although it can only fire a total of two shots before having to reload, each one delivers an explosive payload capable of taking out large groups as well as fortified constructs. In between shots, Booker must crank the weapon to chamber the next rocket. Booker can also use it to aim, although its range is limited to its crosshairs.

The Barnstormer RPG is an incredibly powerful weapon that fires slow-moving but deadly rocket-propelled grenades toward your enemies. These rockets inflict incredible damage and can take out several enemies in a single shot or destroy a Heavy Hitter very quickly.

An RPG can first be seen among the contraband weapons hidden in the secret stash in The Fellow Traveller. If the player doesn't find the secret room, they will find another RPG lying on top of a crate near the trolley in the Hall of Heroes Plaza.

It's best to employ the RPG against adversaries that are a moderate distance away, as using it too close can backfire, since Booker isn't immune to the explosion damage caused by RPG ammo. It's also generally not worth the ammo to use the RPG against single foes—save it for Heavy Hitters or massive groups.

RPG explosions have the same fire effect as the Devil's Kiss Vigor, which allows the player to use it instead of the Vigor, though ammo is much less common than Salts. Also, RPG rockets can set oil slicks ablaze, creating a devastating wall of flames! Firemen are unaffected by the blast though.

Be careful when using the RPG against distant enemies: because its rockets do not travel very quickly, opponents may have time to move out of the way long before the rocket reaches them. The speed of the rockets can be upgraded however, so enemies will have less time to dodge the attacks.

This weapon should NOT be used against the Boys of Silence in Comstock House. Despite its firepower, the Boys' Tear-manipulation will protect them from the blast, and player will only end up wasting more ammo if they use the RPG on the summoned minions. 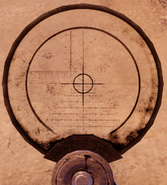 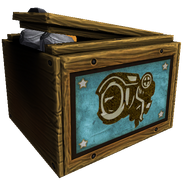 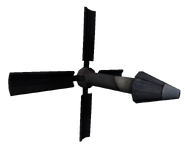 Rocket fired by the RPG. 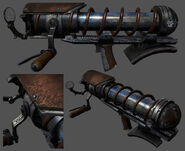 Early concept art for the RPG #1. 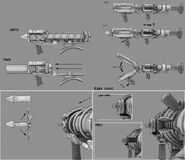 Early concept art for the RPG #2.

Early concept art for the RPG #3.

Concept art for the RPG projectile. 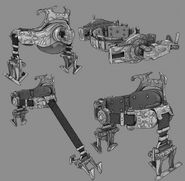