“Never could figure out if the thing's designed to cook a turkey or a Splicer.”
― Booker DeWitt[src]

The Radar Range is a weapon featured in Burial at Sea.

Described as the "Oven of the Future", the Radar Range is a powerful microwave projector created by Fontaine Futuristics. It uses a powerful microwave energy beam to heat up food and cook it, however, the device is also highly dangerous if not used correctly as it can also be used to cook (and kill) unfortunate people if turned against them. Although the device was advertised to the public as the "Oven of the Future",[1] it was also used as a weapon by Ryan Security.[2]

Using a Radar Range on Splicers will cause them to heat up and eventually explode after a short while. Any enemies that happen to be in close proximity to the target when it explodes will suffer splash damage. It should be noted that the weapon rapidly burns through ammunition while the trigger is held and ammo is not all that easy to obtain. As such, careful trigger discipline will be needed in order to minimize ammo waste and to avoid running out of ammo mid-fight.

The player is first acquainted with the Radar Range when private detective Booker DeWitt and his client Elizabeth walk by a woman and a man discussing the new weapon/kitchen utility on Market Street. An advertisement can also be heard on the public address system.

Later on in Fontaine's, the duo can spot advertisements for the Radar Range throughout the complex, most prominently outside the Bistro at Fontaine's. Inside the bistro, they will find the weapon locked up in the freezer of the bottom floor kitchen which is secured with a number lock. The player will need to find the code to enter. The crashed elevator in the Electronics department will provide the player just that, in the form of an audio diary by Bert Unger, the man who locked up the Radar Range.

The Radar Range is available as a weapon for Elizabeth in Episode 2 as well and has the same function. The weapon is located in the Control Room at the Service Bay in Bathyspheres DeLuxe. However, there's no upgrade option and if the player is in 1998 Mode, the Radar will not be available for use at all.

The Radar Range in action.

A Splicer exploding by the Radar Range. 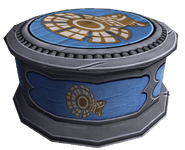 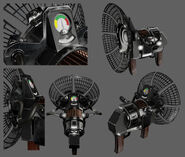