The Shortwave Radio or Service Radio is the primary means of communication between the player and other characters. Because shortwave radios operate within a small band of frequencies, the signal is easily disrupted.

At the beginning of Welcome to Rapture, Jack is asked (by Atlas) using the Would You Kindly trigger to pick up the shortwave service radio in the Bathysphere. The radio is carried throughout the whole game and is automatically activated by an incoming transmission. The service radio is set for a specific frequency which is disrupted by Sander Cohen during Jack's exploration of Fort Frolic. Cohen most likely changed Rapture Radio's station frequency to match that of Jack's shortwave. Rise, Rapture, Rise can be heard playing at the beginning of the frequency disruption.

Subject Delta also uses a radio in BioShock 2. It appears to be covered with a thin layer of seaweed, slime, and coral. This radio is most likely built into Delta's suit somehow, since it activates as soon as he awakens after first being revived at a Vita-Chamber.

When Booker DeWitt and Elizabeth regain consciousness inside a Bathysphere heading toward Fontaine's Department Store, Sander Cohen will speak to them through the service radio inside the sphere.

Elizabeth uses a Radio to keep in contact with Atlas as well as some other important characters. When Elizabeth imagines that Booker is speaking to her, his voice will come from her radio.

Examining a Radio found inside a Bathysphere in the Service Bay of Bathyspheres DeLuxe will trigger a vision of Rapture to flash before Elizabeth's eyes. 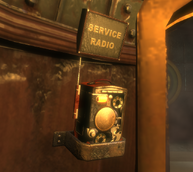 The radio, as seen in BioShock.

The radio, as seen in Burial at Sea - Episode 1.

The radio, as seen in Burial at Sea - Episode 2.

Elizabeth's vision of Rapture, triggered by the radio.