“He pays the rent for my 'darling little shop.' Which just happens to have everything Mr. Cohen here ever recorded. And some other people too—Sinatra, Billie Holiday.”
― Silas Cobb[src]

Rapture Records was a record company and record label with stores located throughout Rapture. The most well-known branch was owned by Silas Cobb in Poseidon Plaza within Fort Frolic. Another was located on High Street. The establishment was a subsidiary of Sonorous Inc.

Billie Holiday and Frank Sinatra are two artists mentioned off-hand in the book.

“Come on to the record store, I'll show you what I think of your plinkity, plink, plink!”
― Silas Cobb[src]

Much like the rest of Rapture, the Rapture Records store in Poseidon Plaza has fallen into disrepair by the time Jack sees it during the events of BioShock. However, the shop's deterioration isn't merely the result of collateral damage from the Civil War. Rather, the whole place has been torched by music devotee and former Sander Cohen disciple, Silas Cobb. Cobb has taken his anger at being imprisoned in Fort Frolic out on his own store: the sign behind the counter is crooked and flickering, the furniture has been tossed, and all the lights inside have gone out, making the only illumination that of the numerous fires throughout the store. Posters for Sander Cohen's various plays and the "SOng Bird" are scattered about and charred. Like most of Rapture, this section also shows signs of dangerous leakage.

Silas Cobb is one of Cohen's former disciples that must be killed and photographed to complete Cohen's Quadtych. Cobb can be found in the record store, which has been rigged as a trap for the player. Jack approaches the figure sitting by the burning collection of records only to realize it's a corpse rigged with a time-bomb. Cobb is disappointed in not being able to take his revenge out on his former lover, but is content in sending a wave of Spider Splicers to attack Jack. After dealing with the fiery foot soldiers, Jack can turn his attention to Cobb.

In the downloadable content, Challenge Rooms, Rapture Records is one of several stores operating out of Rapture's Grand Carnival during A Shocking Turn of Events. After the player picks up the Static Discharge Tonic, a Breadwinner Thuggish Splicer will hit the light switch (the only one ever seen in Rapture) for the shop's marquee and emerge from the store.

One cannot really investigate the place since, with the exception of the front entrance way, the inside of the store is shuttered by a security gate. It's too dark to see much of anything inside, but there is Coffee, a hypo of EVE, and a crate with the invention component Glue near the front.

In the storyline of the viral website There's Something in the Sea, Mark Meltzer came into possession of a record containing the song "Rise, Rapture, Rise" with a message hidden at the end of the track. This record came in a sleeve printed with the Rapture Records logo. Also, many fans who sent mail to Meltzer's New York City post office box received a copy of the aforementioned record.

In the BioShock Infinite downloadable content, Burial at Sea - Episode 1, Rapture Records is one of many shops operating out of High Street. The store is large and has a sizable collection of records for sale, including Why Even Ask?, Ryan's Songbird, and a Rapture Radio record. In addition to LP records, the store sells musical instruments such as a guitar, cello, and a grand piano as well as a phonograph. The facility also repairs instruments as indicated by the number of fiddles in the back.

The store is one of the sponsors for Sander Cohen's private club, and therefore the owner, named in the game files as Murray, is provided with a unique bunny mask as identification to enter the club. Booker and Elizabeth must visit the shop to look for the mask. Elizabeth poses as a music-loving customer to distract the shopkeeper while Booker searches the back room. There he finds a lockbox with a small amount of money inside and the mask box on a desk beside a trumpet. To hold the man's attention while Booker investigates, Elizabeth adopts the role of an audiophile nearly driven to ecstasy by the music.

Burnt to a crisp.

Who's that in the distance?

Pull up a chair and enjoy the fire.

Someone's not a fan of Cohen's work.

Inside the High Street store.

Rapture Radio, Ryan's Songbird and Why Even Ask? at display.

A grand piano for sale in the store.

Come and enjoy the song.

The workroom in the back.

Could this contain the needed mask? 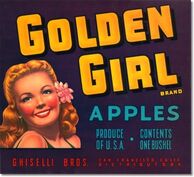 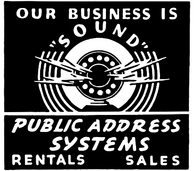 Clip art for "Our Business is 'Sound' - Public Address Systems" 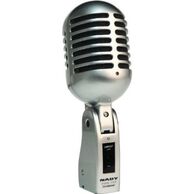 Stock image for the Nady PCM-100 Microphone. Note the modern LED which can be seen on the poster. It itself is an imitation of the iconic Shure Unidyne. 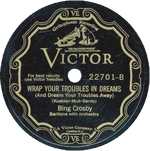