“Quality paper… before the locals stopped readin' and started findin' uh… other use for it.”
― Stanley Poole[src]

The Rapture Tribune was a newspaper in the underwater city of Rapture and, judging from its many advertisements, the most popular paper among the city's populace.

Stanley Poole was an employee of the newspaper before it suspended publication due to Security Order 217. The headquarters for the Rapture Tribune can be seen from the window of Market Street just outside Booker DeWitt's office. Copies of the Tribune can often be found in News Vendor machines and scattered along the ground. Four newsstands can be found on Market Street, with one right outside of DeWitt Investigations, one closed, one seen from the elevator to High Street, and one in the Artemis Suites metro station.

Several headlines on the front page of the newspaper in BioShock and BioShock 2 include:

And in Burial at Sea - Episode 1, the headlines read: 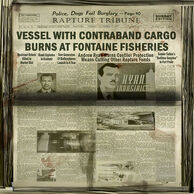 Copy of the Rapture Tribune. 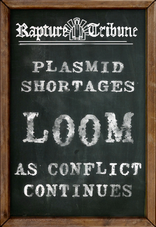 Warning of Plasmid shortages in the first few weeks of the war. 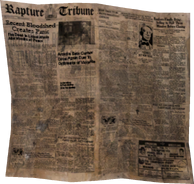 Copy of the Rapture Tribune as seen in BioShock 2 Multiplayer.
Add an image to this gallery

Newstand right outside of Booker's office.

Newstand seen from the elevator to High Street.

Newstand in Artemis Suites.
Add an image to this gallery

Retrieved from "https://bioshock.fandom.com/wiki/Rapture_Tribune?oldid=319457"
Community content is available under CC-BY-SA unless otherwise noted.