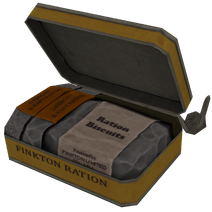 While mass-manufactured, Rations themselves are not as common as one would think. Most likely to be found at military outposts (such as the Hall of Heroes and the Hand of the Prophet) and in Shantytown, they refill a small amount of health upon consumption. It is the most common food sold to lower class Finkton workers.

According to the container lid, the ration contains:

Rations return in BioShock Infinite's DLC Burial at Sea. They were sent along with other supplies to the prisoners in Fontaine's Department Store. The texture for the Ration is nearly identical to Columbia variant, except it is renamed as 'Rapture Ration', though still clearly labeled as a Finkton product.