The Research Camera is a usable item that appears in BioShock, BioShock 2, and BioShock 2 Multiplayer. Unlike the weapons in the games, it does no direct damage to enemies, but it allows the player to gain research rewards.

Main article: BioShock
“The research camera looks just like one you'd see topside. According to this magazine article I scrounged up, it can also 'analyze genetic information, parse biological structures,' and lots of other five-dollar words.”
― Atlas[src]

The Research Camera does no damage itself, but it is an important addition to the players arsenal. It is found on the level Neptune's Bounty. It is equipped the same way as a weapon, and uses Film to take pictures that unlock biological weaknesses and hidden secrets through research of every Splicer, security device, and Big Daddy. In each research tree, there are five levels that require increasingly more photos to complete. On the first, third, and fifth levels of completed research, a permanent damage boost is applied against the researched enemy type. The second and fourth levels of completed research yield various Gene Tonics and other bonuses that are extremely useful. Little Sisters are the exception, as a permanent increase to health and EVE is given for each completed level of research. The Damage Research tonic increases effectiveness of damage bonuses from research. The Research Camera cannot be upgraded. Film for the camera can be found and sometimes bought from vending machines.

For all machines in this section, using Electro Bolt, Winter Blast or Liquid Nitrogen is a good way to keep them from threatening the player.

Little Sisters respawn at approximate intervals of 3 minutes. Every time a Big Daddy puts a Little Sister back in her vent after she complains about being tired or her belly being full, he retrieves a new one. As such, it is entirely possible to finish fully researching Little Sisters by merely following around a single Big Daddy.

The Research Camera in Sullivan's office.

A photo taken with the Research Camera.

Main article: BioShock 2
“That thing's a miracle in technicolor, kid. Works like a movie camera. Start the film rollin' before you open fire on a Splicer, and then anything you hit him with tells you more about his DNA.”
― Augustus Sinclair[src]

The Research Camera returns as a usable weapon, both in the single-player campaign and in multiplayer. It is the sixth weapon found in the game, and is the second weapon found in Pauper's Drop.

The camera has the same function in the campaign as with the original, granting Subject Delta permanent rewards for researching different enemy types. However, unlike the original Camera, this new tool records videos instead of pictures and doesn't require any collectible film to run. It also functions differently from the original in many other ways.

The Research Camera detects various types of attacks during a battle and will increase the score if different ones are used in combination. Different icons are shown for each while the film reel is rolling. A small plus mark will appear on the icon if a type of attack is especially effective.

In multiplayer, the player will always have it equipped, and can use it to research dead bodies (by pressing a "research" button which pops up when near an enemy corpse), granting them a damage bonus against that particular enemy during the match. It takes a small amount of time to photograph a corpse, leaving the player open to attack. If the player is killed by a researched enemy, the research will be lost. Research bonuses are also lost upon transforming into a Rosie. The Research Camera now uses the Flash Port on the back of the camera, and features an early design of the Flash Bulb mounted to its left side. 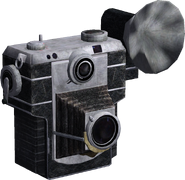 Model render of the Research Camera in BioShock 2 Multiplayer. 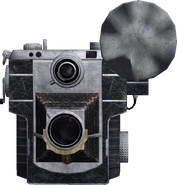