Richard's is located only a few stalls over from Milton Fine Quality Cheese, a presumed rival, and the only other cheese provider in the market. Whether due to financial trouble or the growing unrest caused by the Rapture Civil War, the stand went out of business as the city plummeted into chaos. Its last business, before the collapse, was a 50% off sale. 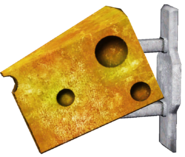 When Jack reaches the market in search of Lazarus Vector components, the business is a husk of its former self. A Security Camera overlooks the stand while a Baby Jane Thuggish Splicer searches beneath the counter for some useful loot, but there's not much to find. Even though it is a cheese store, rotten pumpkins can be found on top of the stand's counters along with a carton of bandages and a pack of cigarettes. A lockbox containing an Empty Hypo and some film can be found underneath.

Retrieved from "https://bioshock.fandom.com/wiki/Richard%27s_Farm_Fresh_Quality_Cheese?oldid=300320"
Community content is available under CC-BY-SA unless otherwise noted.