The Rivet Gun is a weapon that appears in BioShock, BioShock 2, and BioShock 2 Multiplayer. It is a formidable weapon, capable of delivering large Rivets with great accuracy. Certain Alpha Series such as Subject Delta and Subject Sigma use a prototype of the Rivet Gun, which functions similarly to Jack's Pistol as the basic ranged weapon. The Rosies use a more simplified Rivet Gun, which can be looted when they are killed.

The Rivet Gun is the main weapon used by the Rosie. This powerful tool fires high-power Rivets at enemies. Because of its massive size and weight, the Rivet Gun cannot be wielded by a human such as Jack. After defeating a Rosie, Jack can search the Rivet Gun for U-Invent components and Money.

First appearing as the iconic weapon of the Rosie, Subject Delta finds it in the Adonis Luxury Resort, blocking a door. It is the second weapon acquired by the player.

In the single player campaign, Subject Delta is able to fire three different ammunition types. As with all other weapons, he is also able to perform a quick-melee attack by thrusting the Rivet Gun forward at his target, dealing minor physical damage. The player is able to headshot enemies with the Rivet Gun, dealing 300% normal damage against Splicers and Alpha Series. Compared to the Rosie's weapon, Delta's has a much more complex design, and is designed to better suit combat at the cost of its repetitive capabilities.

A larger magazine increases the clip size, resulting in 50% more shots before reloading.

This upgrade extends the Rivet Gun's clip to eighteen shots before having to reload, up from the original twelve, and turns the weapon's cylindrical Rivet spool into a rectangular case. This upgrade also allows Subject Delta to carry an additional 24 rounds of regular Rivets, and 12 extra rounds of Trap Rivets and Heavy Rivets.

An internal heating mechanism heats rivets to a white-hot temperature before they are fired.

This upgrade gives each Rivet a chance to ignite an enemy on impact, causing them to take extra damage over time.

Unlike the Drill, the Rivet Gun is a suitable weapon for any player, regardless of playing style. At the start of the game, it can be used to help determine one's combat preferences, and will remain a useful tool in one's arsenal for almost any situation afterwards. However, its jack-of-all trades status is also its weakness: while it can fulfill many roles in combat, it excels in none. Although a good backup weapon, it is recommended the player specializes in a weapon that fits their playing style first.

Multiplayer Rosies use the mass-production Rivet Gun, and as such only are able to fire standard Rivets. While Big Daddies in the multiplayer will have infinite ammo, it is possible for their weapon to overheat, as noted by the gauge at the bottom left corner. Multiplayer Rosies also have a quick-melee attack, allowing them to swing the Rivet Gun sideways for a high amount of damage and slight knockback. They are also able to throw Proximity Mines, but only carry 6 of them. The Rosie can fire 11 to 12 Rivets in a row before the Rivet Gun will overheat.

Concept art of the Rivet Gun in BioShock 2.

The Rivet Gun's page in Deco Devolution: The Art of BioShock 2. 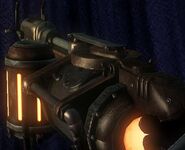