“The mind of the subject will desperately struggle to create memories where none exist…”
― R. Lutece, Barriers to Trans-Dimensional Travel, 1889[src]

Robert Lutece is a quantum physicist in BioShock Infinite. Throughout the game, Robert and his female counterpart Rosalind escort Booker DeWitt to and across the city of Columbia, offering him aid. Though the Luteces' actions mainly help Booker, they once aided Zachary Hale Comstock, supplying him with the technology necessary for the creation of Columbia.

Robert Lutece is a pioneer in the field of quantum physics, belonging to the same reality as a Booker DeWitt. He was contacted by Rosalind Lutece, his female counterpart from an alternate reality and "sister," after she discovered a way to mechanically engineer "Tears" in her world and across multiple universes. The two then correspondingly opened a Tear between their realities so they could meet face to face. They eventually became agents for Zachary Hale Comstock, developing technology to aid in Comstock's development of Columbia.

However, the use of their technology caused Comstock's body to deteriorate, leading to his sterility.[1] Because of this, Lady Comstock was unable to bear a child.[2] Comstock was certain that Columbia would only prosper if he had an appropriate heir. Therefore, he tasked the Lutece twins to use their Tear machine to find him a child, which they did, bringing him Elizabeth.

As the Lutece twins continued to experiment with Tears, they foresaw Comstock's future with his efforts to guide Elizabeth into leading Columbia and the resulting destruction of New York City several decades later. Realizing their mistakes in orchestrating Elizabeth's fate, Robert gives Rosalind an ultimatum: he would part company with her if she was not willing to help him undo what they had done, and return Elizabeth to her original universe.

Uncovering the twins' plot, Comstock assigned Jeremiah Fink to sabotage their Tear-manipulation machine with the two inside. This was accomplished on October 31st, 1909, and the twins were believed to be dead. The real result was that they now existed across all of space and time, which allowed them to appear wherever and whenever they wanted. Rosalind was content with this state, as she could stay together with her "brother" free of restraint from life, death and all divided barriers of possibility. However, Robert was still not satisfied with the unresolved matter of Elizabeth's fate.[3] Their circumstances made the task much more difficult, as they risked disrupting realities even further if they directly interfered, now that they were thought to be deceased. Robert then proposed that for their unfinished business to be resolved, they must bring Booker DeWitt to Comstock's universe to retrieve his daughter. Rosalind was opposed to the idea, but gave in once Robert gave her an ultimatum: help him reunite Elizabeth and Booker, or he would leave her.

The twins take Booker DeWitt to a Lighthouse, and provide him with a box holding information and supplies related to his "job" to clear his "debts."

Their actions do not go unnoticed. Comstock becomes aware of Booker's arrival and attempts to fend him off with every resource available to him. The Luteces continue to assist and guide Booker, using their ability to appear to every Booker that attempts to free Elizabeth in every reality.

After Booker and Elizabeth destroy the Siphon, they realize the Luteces' role in Elizabeth's history. Comstock tasked Robert with obtaining Booker DeWitt's infant daughter, Anna, in return for absolving Booker of his significant debts. Booker initially agreed, but changed his mind and tried to get her back. Robert withdrew through the portal, but Elizabeth's pinky finger was caught, severing it.

Robert's character model can be unlocked in The Columbian Archeological Society's museum. When both Robert's and Rosalind's models are unlocked, a Tear will appear, giving the player access to the Lutece Labs, where five new Voxophones can be obtained, recorded by Rosalind Lutece.

After the fight with the Big Daddy, Comstock remembers everything from his past life: In one universe, when Comstock tries to kidnap Anna DeWitt through a Tear with the help of the Luteces, Anna loses her head instead of her little finger. This event caused Comstock to fall into a deep depression, to the point where he asked the Luteces to open a Tear to a place where Anna DeWitt never existed. That place was Rapture. As Elizabeth confronts him, the Luteces reappear again, taunting him about his choices, just before Comstock gets impaled by a drill.

Directly after Comstock is killed, the raging Big Daddy turns its attention to Elizabeth. With no time to react, Elizabeth is killed by the Bouncer. Due to her unique abilities, Elizabeth is given a choice to return to Rapture, to save the little girl Sally. She is transported to the Lighthouse, where she will continue her journey, in a row boat by the Lutece "twins." They warn her about what's going to happen. As they drop her off, they drift away into the darkness, singing "Row, Row, Row Your Boat."

Later on, Elizabeth is forced to travel back to Columbia via a Tear from Rapture. While climbing through an Air Vent, she passes next to the room where Jeremiah Fink and his son were held hostage by Daisy Fitzroy, during the Vox Populi's assault on the Factory. She overhears Daisy in counsel with the Luteces. Daisy offers her gratitude for what the Luteces have done to get the revolution against Comstock and the Founders in motion, but flat out refuses to take the life of Fink's son along with his father's. The Luteces correct Daisy, meaning that she misunderstood their agreement; they never said that she must hurt the child or that she will be the one that takes down Comstock, meaning that she has to die for her revolution. Daisy is unsure but the Luteces tell her that the future she envisions is possible if she makes the right choice. The Luteces then explain that a girl is coming and that in order to change the world, she must leave a woman, and then asks: "What makes the difference between a girl and a woman?" Daisy answers with "blood," Daisy then asks them how, and they tell her to give the girl no choice. After the conversation, the light flickers and the Luteces disappear.

The episode reveals that the Luteces had the choice to go back to their past lives, just like Elizabeth did, but the risk of losing their powers to explore the universe was too great, so they decided to stay as they are. If Elizabeth is killed during the episode, the Luteces will occasionally narrate under the loading screen, commenting on Elizabeth, Atlas, and Suchong. It is unknown what happened to the Luteces after this and the end of Burial at Sea; it is possible that they either stopped existing or they are still somewhere out there, exploring the multiverse.

Unlike the gameplay of its predecessors (and indeed the main game itself), if the player dies as Elizabeth, she will not respawn or get revived. Instead, the player resumes from the last saved point in their game. The loading screen consists of various locations within Columbia and Rapture, with either ambiance and music playing in the background, various audio diaries/voxophones, or several quotes and banter between the Lutece Twins regarding the various characters of Rapture including Elizabeth and her choices.

Much like his "sister", Robert behaves and talks in a very monotone, sardonic, and eloquent way. He and Rosalind like to perform several experiments, presenting Booker with choices which they attempt to predict the outcomes of. Robert frequently bets against Rosalind, and wins most of the time. Unlike his counterpart, however, Robert is not a fatalist, often attempting to apply a humane angle to Rosalind's purely scientific perspective. Rosalind describes this by saying that where she sees King Lear, Robert sees only a blank page.[4]

An early model of Robert Lutece compared to a normal citizen. 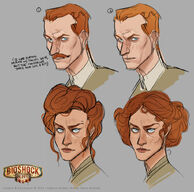 The difference in facial features between Robert and Rosalind.

Model for Robert in a raincoat.

Views of Robert Lutece in a raincoat. 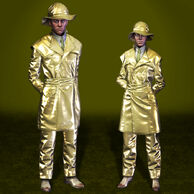 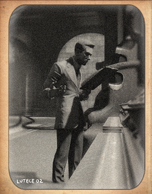 Robert identified as Lutece 02 in the Silver Fin Restaurant. 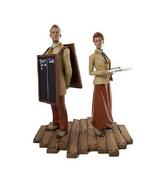 Booker viewing the Luteces through a Telescope.

Booker has heard of digging one's own grave, but this has got to take the cake.

"Bring us the girl, and wipe away the debt."

Robert and Rosalind at the Raffle and Fair, asking Booker to flip a coin.

Robert and Rosalind at the Raffle and Fair.

Robert Lutece behind the counter at The Blue Ribbon Restaurant.

Robert and Rosalind at Battleship Bay.

The Luteces appear in the Good Time Club prison.

Robert hands Booker a schematic for the Songbird Defense System.

The Luteces playing a game of catch.

Turns out that Robert is really painting a self-portrait. Of course, he is the same person as Rosalind. 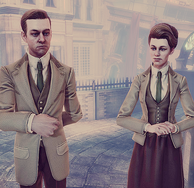 The Luteces explaining about the three truths that must be uncovered.

The Luteces appear before Booker in Comstock House.

Robert, standing outside the Tear to an alternate universe.

Robert, in his raincoat, awaits Booker through the Tear.

The Luteces watch as Booker's story comes together.

The Luteces examining the brand on Booker's hand.

Opening a Tear to Rapture in the late 1950s.