For turrets in Rapture, see Turret.

Rocket Automatons are a type of Basic Security Automatons encountered in Columbia in BioShock Infinite. As their name suggests, they attack Booker by firing rockets at him. Like the other automatons found throughout Columbia, they can be temporarily disabled by using the Shock Jockey Vigor on them or they can be turned into a temporary ally with the Possession Vigor. A friendly version of the turret can be summoned through Tears. Unlike their Machine Gun counterparts, Rocket Automatons are rarely encountered, only appearing in two levels throughout the game: the Factory and the Hand of the Prophet. 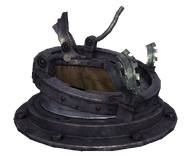 A Rocket Automaton summoned through a Tear.
Add an image to this gallery

Behind the Scenes Edit

Retrieved from "https://bioshock.fandom.com/wiki/Rocket_Automaton?oldid=322623"
Community content is available under CC-BY-SA unless otherwise noted.